Dr Mario World Redrawn is a ROM hack, created by B.B.Link, of Nintendo‘s Super Mario World which brings an entirely new adventure to SWM feature Dr. Mario and Wario teaming up including a new story, graphics, music, enemies, and more. If you want to see a video of Dr Mario World Redrawn in action, check out the video below. 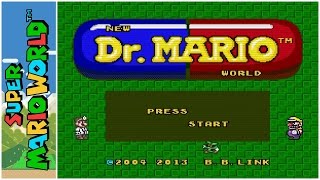 Dr Mario World Redrawn has a bit of a turbulent upcoming. The creator worked on it for some seven odd years before losing much of the game to a hard drive failure. Following that, he picked what he had up and started work again, working to bring it back and put out a working state. Incidentally, B.B.Link never got around to many of the things he wanted to put in the game but the version we have now is quite something in spite of that. This hack takes an interesting direction for the story. Toad has gotten horribly ill from something called The Evil Virus. Naturally, it’s up to Mario to do something about this (good thing he puts aside plumbing to be a doctor on the weekend). One neat feature is that you can either play as Mario or Wario, the latter’s story being that he wants to get his hands on Megavitamins to make himself filthy rich. The two will join forces, venturing out in an attempts to defeat the virus to achieve their goals. One of the best parts of Dr Mario World Redrawn is that the levels are broken up into traveling to a patients house and then once you get there you have to enter the patients body and defeat the boss. This mimics the functionality of the classic Mario formula of beating staging to get to the castles and take on the bosses there but does a fantastic job skinning it to fit the theme. The graphics of the game have been changed entirely from start to finish with new sprites for characters and enemies alike as well as new graphics for items and background elements. Everything in the game feels like it was ripped from Dr. Mario and is excellently crafted creating a very visually pleasing work all around.

Dr Mario World Redrawn offers much of the same gameplay as the base game with it’s most unique points being the choice between the character that you play and the unique abilities that come with that character. The levels in this hack are well designed and balanced, however, seem to lack variety after the first few zones. Variety is also lacking in the boss department with many of them simply being reskinned bosses from the base game adding nothing new to better fit the Dr. Mario theme.

This hack presents a number of new sounds effects to match the new them as well as music to go along. While the music is fitting and well incorporated, there are only a few and after some time these begin to feel repetitive. If you wish to play this game you can download the Dr Mario World Redrawn Rom by clicking here.

So is this game worth a try? Dr Mario World Redrawn is a well imagined redesign of SMW complete with its own theme and story creating an entirely new and unique aesthetic for players to enjoy; nearly every aspect of the game has been changed to reflect the Dr. Mario universe. Dr Mario World Redrawn is well designed and balanced but offers little in the way of new elements as it presents itself largely as a reskinned SMW.