Hyper Street Kart is a crossover ROM hack, created by hacking duo The Real Phoenix and Ten Shu, for the SNES game Super Mario Kart which takes the Street Fighter universe and uses it to reskin Mario Kart. If you want to see a video of Hyper Street Kart in action, check out the video below. 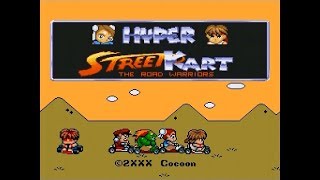 Hyper Street Kart brings to the fandom what fans have been missing out on all these years: a kart racing game featuring Street Fighter characters. Thanks to the efforts and talents of The Real Phoenix and Ten Shu we can finally experience one of the few genres that Street Fighter has not clawed its way into. The tracks in the game were completely altered and designed after Street Fighter levels that should be familiar such as the water level of this hack being themed after Ken’s stage in Street Fighter II. While there is a great amount of effort showing in Hyper Street Kart, there are a handful of places where it could have been perfects. I imagine it was difficult to come up with in-universe representations for some of the power-up that at least made some sense in regards to their original, but seeing Star Power and Banana Peels (this one isn’t so bad) throws off the theme a bit.

The title screen in this hack is a significantly altered version of the original game’s, as seen below. Hyper Street Kart has completely reskinned the original game of SMK and replaced the sprites, tracks, and some items, and some background elements with Street Fighter accurate imagery. Each of the sprites are meticulously crafted and extremely well designed (in particular the giant E.Honda blip on the Victory Screen got a good laugh out of me).

Hyper Street Kart presents the same gameplay of the original game with the new characters taking the place of their respective counterparts in the character select page (Ryu in the place of Luigi, for instance). As far as I can tell, the characters play just as they would in the original SMK if you were to pick whichever particular slot they would be in (Ryu playing like Luigi/Mario).

Unfortunately, no sounds were altered in this hack. It would have been the stomp to finish it off if Street Fighter music had been implemented. If you wish to play this game you can download the Hyper Street Kart Rom by clicking here.

So is this game worth a try? Hyper Street Kart is a fun little hack which cross-themes SMK with Street Fighter. The sprites and redesigned items, as well as tracks and backgrounds, are well designed and offer a new flavor for long time SMK players. The hack offers little else besides graphical changes and could benefit from implementing more elements, such as changes to the functionality of items or tweaks to certain characters stats, from the Street Fighter universe.