100 Rooms of Enemies is a ROM hack, first created by Daizo Dee Von, of Super Mario World which takes the concept of the Pit of 100 Trials from Paper Mario and creates a similar challenge for SMW. If you want to see a video of 100 Rooms of Enemies in action, check out the video below. 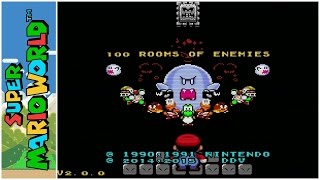 100 Rooms of Enemies was created in response to a comment made about games stating that “games without the ability to save progress are never fun.” Daizo Dee Von took this to heart as a challenge and set out to make his hack and released it in 2015. The hack would go on to see fame in 2017 and since then has seen numerous updates including the addition of new modes such as Nightmare Mode. Not much to speak of in the way of plot here, but that is hardly the point of this hack. Buckle in for a trail befitting a warrior and leave no enemy standing as you battle your way through 100 rooms riddles with various adversaries both familiar and new. Do not forget to reach for the stars by attempting to get the highest score possible for extra bragging rights. 100 Rooms of Enemies puts familiar enemies on innovatively crafted levels where often the terrain serves their strengths and requires a fair degree of awareness. Ultimately, the game is simple in premise but it is excellently executed.

The title screen of this game is much altered from the base game’s, as seen below. A number of graphical changes, most minor some major, were implemented in this hack. Minor changes were made to various tile sets or objects to create the numerous levels while bosses are often entirely unique sprites.

One thing that specifically stood out to me about 100 Rooms of Enemies is it’s keep and seamless gameplay. On each level/floor once you defeat the enemies available the game easily fades out and then back in to the next. This simple yet sleek feature leads to a gradual build up of adrenaline as you are thrown from one challenge to the next with only a fleeting moment to assess your situation and act.

Sound effects in the game remain unchanged but there is all new music to be heard throughout your playthrough. From the title screen’s ominous track there is no end to well crafted music in this hack. The composer makes use of a handful of familiar tracks and remixes the befit the theme of the hack. If you wish to play this game you can download the 100 Rooms of Enemies Rom by clicking here.

So is this game worth a try? 100 Rooms of Enemies is a relief from the normal pace of SMW and refocuses the players efforts on a simple yet challenging arcade style battle mode against various enemies. This hack is perfect for burning a few minutes or challenging your friends.