Super Mario World was overwhelmingly critically acclaimed when it hit Western markets in 1991 and placed itself among Nintendo‘s all time greats and the best selling game for the SNES with its charming visuals and phenomenal replay value. The development team for this game was given much more freedom than previous Mario titles as Nintendo wanted to focus on the extra features and capabilities of the SNES. Interestingly, Yoshi was conceptualized well before this game’s release but only appeared here first due to hardware limitations.

If you want to see a video of Around The World in action, check out the video below. 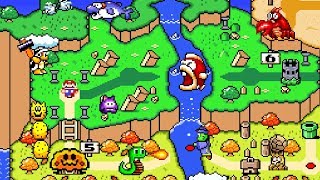 Around The World is the sequel to another hack, by the same creator, by the name of The Twelve Magic Orbs. Much like it’s predecessor, it sets out to craft an entirely new adventure for Super Mario World that takes you through various handcrafted levels complete with new enemies and challenges to explore. The story in this one picks up right after the end of the first games and tells the tale of Mario once again setting out to save Princess Peach from the clutches of Bowser, however this time Bowser has taken the Princess to a space station and is looking to destroy the entire world. The experience of this hack holds itself fairly close to the original game in pacing and in a difficulty curve from one world to the next. While Around The World does offer an increased difficulty not quite offered by the original game, it rarely pushes that difficulty over the threshold.

The title screen of this hack, presented below, is a heavily altered version of the original game’s title screen. The graphics of this hack are what the creator has called choconilla, a combination of the original game’s graphics along with plenty of new tilesets and sprites mixed in creating a uniquely familiar but also fresh visual experience for the player.

Around The World’s gameplay is strictly based on the general concepts that you will find in the original SMW in that it does not throw many new mechanics at the player. Namely, a wall jump has been added to the game creating some new interesting vertical challenges, and the game makes use of various trick walls throughout a number of its levels.

This hack offers a variety of different music in the place of the original game’s music. You will notice, if you are familiar, that many of the tracks are pulled from Crash Bandicoot games (as the creator admits that he is a huge CB fan) as well as other titles including other Mario titles, Donkey Kong games, and Zelda, or instance. The soundtrack of this hack really stands out and is a truly beautiful selection across many classic titles. If you wish to play this game you can download the Around The World Rom by clicking here.

So is this game worth a try? It is easy to see how much work and love went into crafting Around The World from it’s inspired graphics to it’s amazing soundtrack. This hack offers well crafted levels that tease the middle ground of difficulty more often than not but rarely goes too far. Playing this hack was a wonderful and relaxing experience.