If you want to see a video of Donkey Kong Country Mania in action, check out the video below. 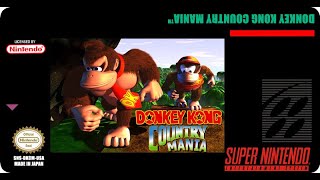 Donkey Kong Country Mania takes inspiration from Sonic Mania which was a game that returned to the original Sonic games and presented the levels there in a new light with redesigns and altered graphics. DKC Mania is primed to do something similar, taking design elements from other Donkey Kong titles and presenting them here. A lot of attention when into the details of each level in this hack in order to ensure their balance and to create a consistent flow throughout which appears to be comparable, if not somewhat better, than the original Donkey Kong Country. You will not find any crazy gimmicks or impossible perfect jumps in this one, the hack creators have turned their full attention to simply redesigning the iconic levels and presenting them with a handful of new twists and turns as an extension of what was there before.

The title screen of the original game remains unchanged for this hack. No changes to the graphics of the game where made in this hack.

As far as ROM hacks go, Donkey Kong Country Mania appears to have an even difficulty curve and overall fairness that is reminiscent of the original game. Veterans of DKC will notice many comparison between the original games levels and these new/altered ones. One of the most notable things for me is how the levels, while different in many ways, appear to hold much of the same balance and this hack lends itself to being extremely approachable and not reliant on prior knowledge even for uncovering secrets.

All the original sounds and music are present in this hack. If you wish to play this game you can download the Donkey Kong Country Mania Rom by clicking here.

So is this game worth a try? Donkey Kong Country Mania offers a very familiar experience to what one would experience from playing the original DKC and DKC2 as it pulls inspiration from both of those games while interspersing they creators’ own ideas. Unlike a number of other hacks out there, this offers a rather even experience that never pushes the challenge threshold and seems to be more of an exploration into level design. Recommended for those who enjoy playing vanilla DKC but are looking for a little variety.