If you want to see a video of Super Mario World Worse Than Kaizo in action, check out the video below. 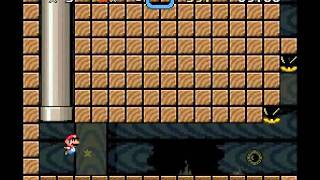 Super Mario World Worse Than Kaizo is a hack following in the footsteps if the infamous Kaizo craze that came about after T. Takemoto beat us all up and made us cry with his fiendish hacks. This creator hopes to emulate that experience with a slew of their own ideas, using the Kaizo works as inspiration. Naturally, you will notice a handful of familiar concepts presented in this hack if you are a frequenter of playing or even watching Kaizo style SMW hacks. Prepare for deceit and pain around every corner as the creator throws everything but the kitchen sink at you. Unofficially looking to be something like a Kaizo 3, this hack presents players with all the same intensity (and rage) that made the first two Kaizo hacks so memorable (and so infuriating).

No changes to the title screen of the game are presented in this hack. Besides the overall level changes made in the maps, the graphics from the original game remain in tact here.

One can easily pick out the inspiration in Super Mario World Worse Than Kaizo but that does not stop it from delivering a unique experience. We get classic Kaizo tricks like dangerous starts above impending doom but also new spins on familiar ideas such as the Big Boo Boss set in a horizontal room in which one has to navigate.

This hack does not make any changes to the original music of the game. If you wish to play this game you can download the Super Mario World Worse Than Kaizo Rom by clicking here.

So is this game worth a try? Super Mario World Worse Than Kaizo embodies the energy of a Kaizo hack while presenting plenty of ideas to call its own. This hack contains a combination of familiar challenges  but overwhelmingly works to provide the player with unique play rather than simply copying. If you have a Kaizo itch, this one should help with that. Though a psychiatrist may be a better option. =P