Super Mario Bros Time and Place is a ROM hack created by Leon Arnott of the Nintendo classic Super Mario Bros. with a temporospatial mechanic introduced. If you want to see a video of Super Mario Bros Time and Place in action, check out the video below. 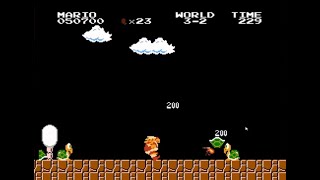 Super Mario Bros Time and Place introduces the ideas of time manipulation to the classic Mario title. The creator states that they took inspiration from the game Braid. In this hack,  you will be able to enjoy all the same mechanics and nuance of the original Super Mario Bros. with the added gimmick of time manipulation. Whether this is some strange anomaly that has taken over the Mushroom Kingdom or a new addition to Mario’s plethora of abilities is left unknown. The game can certainly throw some odd situation at you from time to time particularly in regards to projectiles, platforms, and moving power-ups. Between distorted music, enemies that hang in mid air, and the inability to simply wait on various moving objects provides a unique direction from which to approach Super Mario Bros.

The title screen of this hack is just as it is presented in the original game. No graphical changes were made for this hack

Super Mario Bros Time and Place the main change that this hack offers is an alteration to the coding of Super Mario Bros. that makes it so everything in the game’s universe reacts accordingly to Mario’s horizontal movement. This creates some interesting new ideas forcing the player into continuous movement in order traverse obstacles such as moving platformers.

A side effect of this kind of mechanic is that the player has much more time to think about the obstacles in their path than they would have otherwise had in the original game. This is a minor note tarnishes the pacing of the game

All the original sound remains for this hack but, due to the temporal effects in place, many of the sounds may be slowed or sped up. If you wish to play this game you can download the Super Mario Bros Time and Place Rom by clicking here.

So is this game worth a try? Super Mario Bros Time and Place presents an interesting new mechanic to the typical play of Super Mario Bros. More an intriguing gimmick than anything, the temporospatial effects introduced provide some variety to the game that will briefly entertain but overall does not offer any spectacular changes. The hack as a whole comes off as an idea not pushed far enough but I would say its is an enjoyable play.