My Little Pony Dr Discords Conquest is a ROM hack by RetiredBrony for the NES game Mega Man 3 which brings the My Little Pony universe in to clash with classic Mega Man style adventure. The third installment of the popular series, Mega Man 3 was released in 1990 and critically acclaimed even noted by many to be superior to its predecessors and a major improvement all around in regards to story telling, gameplay length, and adding new qualities instead of simply rehashing from the games before it. Still, the game was remarked as being excessively difficult by some.

If you want to see a video of My Little Pony Dr Discords Conquest in action, check out the video below. 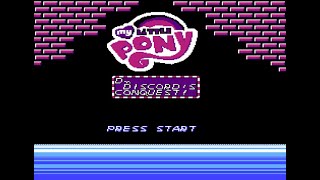 My Little Pony Dr Discords Conquest is a wacky psuedo-crossover of MLP and Mega Man essentially reskinning the entire Mega Man universe with the other much more colorful and cartoonish franchise. As the story goes, Dr. Discord has once again returned seeking to destroy all of the land and in doing so has caused all of Twilight Sparkle’s friends to go berserk. The last remaining sane pony must battle against her friends and other denizens in order to halt Discord’s plans. Dr Discords Conquest plays exactly like a Mega Man game just with a “crazy” reskin applied to it. In light of that, the game is more approachable to a wider range of gamers due to it’s overall design causing it to be a fair degree easier than it’s parent. The creator of this hack went all out recreating elements from the My Little Pony franchise and adapting them to the graphical aesthetic of Mega Man 3. Each level has been completely recreated along with bosses, enemies, menus, abilities, and more. Many of the stages hold design similarities from levels across the Mega Man series while some have pulled inspiration from other games such as Metroid.

I definitely expected Twilight Sparkle and all her ponies to be running around on all fours instead of upright like humans but I can see why the creator opted against this.

My Little Pony Dr Discords Conquest is notably easier than the infamous difficulty of Mega Man 3 which is likely due to the way that enemies are placed in each level and the limited capabilities of all these enemies but most of all the new powerups that your receive from bosses are much stronger than in the base game which generally alleviates a ton of difficulty.

There are some noticeable unpolished points of the game like hitboxes not quite matching but nothing major or game breaking. I got a bit scared when one of the levels had a blind jump in it but fortunately it was the only instance.

Dr Discords Conquest comes with tons of custom music from start to finish all of which have been noted by the creator in the ReadMe file provided on the ROMhacking website. It’s fairly rare for creators to make a note about the music in the game without being prompted so I was delighted to see this as many songs (in many hacks, not only this one) are quite well crafted and enjoyable.

Sadly, no thematic sound effects were added but in light of all the other work put in, I would say that is hardly a gleaming issue. If you wish to play this game you can download the My Little Pony Dr Discords Conquest Rom by clicking here.

So is this game worth a try? My Little Pony Dr Discords Conquest is a cute little ROM hack which takes the theme of MLP and slaps it on top of the Mega Man adventure. Overall, it is an easy ride through classic game if you are familiar to Mega Man. While it does not do anything ground breakingly different with the base game, it does provide a new experience with graphics and music.