Somewhere between a port and a ROM hack, Super Mario Bros Special for NES was created by frantik and Karatorian and looks to bring the scarcely recognized title to the hacking/emulating community. Developed by Hudson Soft for a handful of vaguely obscure platforms such as the personal computer known as the X1, Super Mario Bros. Special was released in 1986, notably only officially in Japan and South Korea, the game is visually and thematically similar to it’s predecessor but features all new levels and some changes to the original game’s physics as well as different enemies and powerups.

If you want to see a video of SMB Special for NES in action, check out the video below. 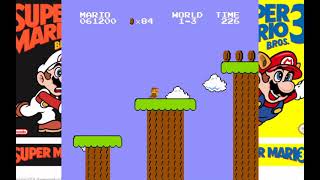 SMB Special for NES only appears like a port of SMBS but in fact no portion of the game’s code was used in the creation of this hack. All levels and features were created with SMBS as a template but otherwise had to be created from the original SMB engine. One of the great points of this hack/port is that it emulates the NES hardware which notably set Super Mario Bros. apart form its predecessor since the platforms that the game was created for were inferior in many ways to the NES. Enjoy the much greater graphics, audio, and lack of various glitches that were present in the personal computer versions of the game. Unfortunately, in Super Mario Bros. Special there were plenty of new items and enemies to experience but these do not appear to have been brought over for this hack and instead the instances of these enemies and items appearing have been replaced with classic powerup and a mixture of enemies.

The title screen presented here is based on the one from Super Mario Bros. Special. There were no graphical changes made to SMB’s graphics for this hack, but notably the graphics presented here are much different than the ones that players would have gotten when playing Super Mario Bros. Special.

SMB Special for NES presents gameplay very similar to the original game and attempts to emulate it as best as possible. Super Mario Bros. Special had a number of differing qualities, namely the change to jumping and dashing physics which provide a different feel and force the player to get used to different timing than the classic SMB.

One feature of SMBS, that has not been translated for this hack, was that the screen did not side-scroll along with the character rather it transitioned when the character reached the end. This presented a great hinderance to the game’s pacing and was, once again, due to the hardware limitations of the platforms the game was created for.

No changes to the base game’s sound effects or music are presented in this hack. If you wish to play this game you can download the SMB Special for NES Rom by clicking here.

So is this game worth a try? SMB Special for NES is an excellent hack/port of SMBS that never saw an official release in North America. This hack presents the game close to how it was originally released but also improved upon many of the limitations and glitches that were present in the game. Overall, the levels of the original game were nearly perfectly transplanted here and create the feeling of a SMB 1.5.