Bare Knuckle 3 is a side-scrolling beat ’em up released in 1994 by for the Sega Mega Drive by Sega and was planned to be the last installment to the series until the series’ revival in 2020 by Guard Crush Games and Lizardcube. The game was praised for its new moves and abilities to the series as well as larger levels but was also criticized for not quite standing up to its predecessors in regards to plot and music. A number of professional review sources also stated that the game was better played as the Japanese version rather than the localized English version, Streets Of Rage 3.

If you want to see a video of Bare Knuckle 3 English in action, check out the video below. 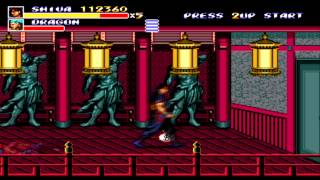 Bare Knuckle 3 English is what the NA (North American) audience should have gotten when the game was released. Instead of a simple translation from the original Japan release, NA audiences received a version of the game that was significantly altered in terms of content e.i. the story set up for the game was all but entirely removed, character’s color palettes were altered, and the difficulty of the game was altered to be harder.

While Bare Knuckle 3 did get an official NA release and translation with Streets Of Rage 3, many of the lines come off as poorly written due to word changes that completely alter the context of what some characters are saying.

Most of the game changes are questionable at best (such as the voice line changes, namely to Axel’s “Bare Knuckle” move callout), but the most boggling choice was the increase in difficulty by altering enemy health and damage tables.

The title screen remains unchanged from its Japanese release.

There were no graphical changes made in this hack and everything remains as it was for the Japanese release of the game.

Bare Knuckle 3 English‘s gameplay is the same as the Japanese release which maintain one extra mini-boss in the game and has a relatively easier Normal difficulty than its NA counterpart.

If you wish to play this game you can download the Bare Knuckle 3 English Rom by clicking here.

So is this game worth a try? Simply put, Bare Knuckle 3 English is what the world should have gotten when the game was released outside of Japanese markets. To this day, I am left wondering about a number of the localization choices made by the NA team, though I think some of it comes down to issues with some of the more “scanty” design choices are a few characters. I heavily recommend this to any Bare Knuckle/Streets Of Rage fan and would say that this version of the game should take place of any fans continued playthrough of BK3/SOR3.