Super Mario Unlimited – Deluxe is a ROM hack created by frantik and Dr. Floppy of the NES game Super Mario Bros. offers a wide variety of new mechanics and alterations to the classic game proving a whole new adventure. If you want to see a video of Super Mario Unlimited – Deluxe in action, check out the video below. 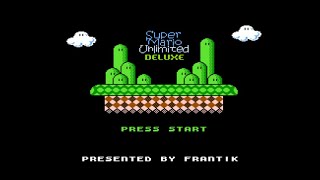 Something of a rerelease of Super Mario Unlimited first seen in 2011, Super Mario Unlimited – Deluxe sports much of the same features from it’s predecessor as well as numerous improvements and alterations. You’ll find plenty of game tweaks which slightly alter familiar mechanics  or provide entirely new options and secrets that were not there before. Along with the redesigned levels and completely reworked graphics, causing the game to look a lot closer to Super Mario Bros.  3, this hack’s alterations to game mechanics offer enough variety to set it apart from the original game and offers a new experience. Much like it’s predecessor, this hack has some issues when considering difficulty and is definitely a bit harder than the game it was created from. While the game specifically advertises a progressive difficulty curve, after the first two levels it seems to crank the difficulty up a fair amount.

The title screen of the original game is significantly changed in this hack, as seen below. The graphics of the original game have been entirely changed, offering a style similar to that of SMB3 while also providing custom tiles in numerous places.

Super Mario Unlimited – Deluxe presents a slew of changes, large and miniscule. Players will find a new powerup, the Stopwatch which freezes enemies, as well as plenty of minor changes to mechanics such as hidden power block being somewhat visible instead of entirely invisible.

One major change is the removal of limited lives. The game will instead count up how many lives you have lost but otherwise there is no in game penalty, or lack there of, for number of attempts. The hack also brings in a number of secrets to be unlock by what it calls Mario Coins. These coins are important to the end of the game which has two endings.

Super Mario Unlimited – Deluxe comes with a large number of secrets as well as different modes such as a Second Quest/Hard Mode and a newly implemented Speedrunner Mode.

This hack offers a fantastic mixture of new and classic music, some remixed tracks, and a score of its own. The new music fits well in the Mario universe, while certainly unique, and provides some aesthetic variety. If you wish to play this game you can download the Super Mario Unlimited – Deluxe Rom by clicking here.

So is this game worth a try? Super Mario Unlimited – Deluxe is a wonderful SMB hack that adds a lot of variety and aesthetic changes to the original game. While fundamentally similar to the original, this hack presents itself with just enough for play to feel like an all new adventure. The creators seem to have pushed the concept of secrets hidden throughout the level which draws out a certain degree of replayability not lacking from the original but here feels more like a goal to achieve.