It has 5 characters; a random character selects feature if you press start. While on the character select screen, an Endless mode like Melee’s ‘Training’ mode, characters are unlocked as you beat them in challenges and so much more.

Be sure to check Super Smash Bros. NES out and let us know what you think.

There are especially three different and unique modes of the game, including:

This game has a lot of characters from Nintendo, third-party developers, and SEGA in a massive roster to choose from.

Super Smash Bros. NES is a fighting game that pairs Nintendo mascots like Mario and Links up with each other in the ultimate dream match. 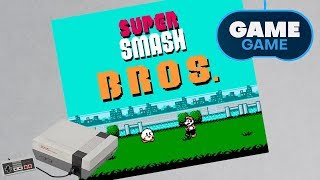 Adventure mode on NES is where you unlock playable characters by completing various challenges and exploring levels. First, you have to look at the first frame of the title screen. The game is called Super Smash Bros. NES instead of Smash Bros.

Kirby’s planet’s background is a picture instead of just plain colors like in the original game. The font is bigger, and everything is spaced out better, so you can read more at once. The drastic graphics improvement is due to the super Smash Bros. NES being modified to use more colors and have more refined character art.

The main objective is to batter the competition off the screen in four modes: single-player, multiplayer competition, training mode, and special ground.

You’ll enjoy the many exciting levels in Adventure Mode, including one where items fall from the sky.

There are several locked stages in the game, and some are unlocked in the initial match of Super Smash Bros. NES. The famous mushroom stage is just like the Mario series games stage.

But several changes allow you to jump higher or move faster. Same pipes with eating plants are placed in the game.

Kirby plays in this series of stages. The Stage is based on water areas, and many blocks fall from above waiting for Kirby.

A stage with many secret passageways used to attack enemies silently. Many towers, as by name castle include in this game.

A stage is full of Metroid’s. The only thing that keeps you continuously moving is acid rising from the bottom shell.

This Stage is full of armored enemies. The spike can stop you by simply touching you in this Stage.

There are many unclocked stages as well. Some of them include:

You can explore different worlds, fight other players, and many other interesting challenges throughout the adventure mode.

The sound quality of the Super Smash Bros. NES game is better because it plays using the original hardware from back in the day. This Nintendo Entertainment System (NES) uses an “RP2A03” chip as its main CPU, designed by Alex Huard and Mark Tapper.

If you wish to play this game, you can download the Super Smash Bros. NES Rom by clicking here.

Smash your way to victory against multiple opponents at once. Who doesn’t want to do that?

Play this game and fight your friends and the characters you played with on the N64.

If you happen to be one of those looking for an escape from their daily lives, then playing the Super Smash Bros. NES game will be a good idea for you.