Mega Man Ultra is a ROM hack of Mega Man 2 created by infidelity which focuses on altered graphic and improvements to enemy/boss AI for a greater challenge.

Mega Man 2 is the bestselling Mega Man game of the franchise, a pleasant surprise to Capcom as the first game did not sell nearly as well. It was initially released for the Nintendo Entertainment System in 1988 and has gone on to become recognized as one of the greatest game of all time prompting the title to be rereleased across several consoles. Mega Man 2 is recognized for its detailed and stunning graphics as well as its addictive gameplay and balanced difficulty as compared to its predecessor.

If you want to see a video of Mega Man Ultra in action, check out the video below. 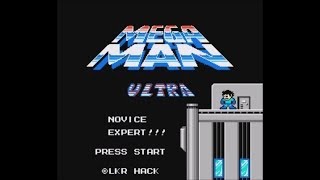 Mega Man Ultra is a hack that hold close to the original design and concept of Mega Man 2 while making a few improvements to increase the difficulty and add variety to enemies and bosses. It also changes some of the aesthetic of the game by altering color palettes for the bosses, but ultimately this hack should feel like a nostalgia run for most fans. Changes to the levels can prove to be rather daunting at first as the hazards of each level have been ramped up to the point where any lapse in judgement or precision can lead the player to a quick death. This is definitely a run that will require some trial and error to memorize the most effective strategy. Mega Man Ultra stands firmly in the middle area as far as hacks go: it doesn’t alter all that much about the base game but it offers just enough variety to keep players interesting for a playthrough. At times the difficulty feels purely artificial with varying degrees of traps set for the player with little chance of avoiding a disaster unless you have experienced it before.

Mega Man Ultra presents a slightly altered title screen from its parent game, as presented below. Most of the graphical changes in this hack are palette swaps to give the game its own unique feel but that developer has also altered the sprites of a handful of enemies as well.

Mega Man Ultra‘s gameplay remains largely unchanged from the original gameplay of Mega Man 2. The levels have been altered slightly to include a much more treacherous and fiendish environment which gives the player much less room for simple mistakes. Enemies remain largely the same as well however the developer has improved the AI of bosses to give them more threatening attack patterns that are often unforgiving.

This hack pulls music from other Mega Man titles as well as various other video games in a collection to form its own unique soundtrack. If you wish to play this game you can download the Mega Man Ultra Rom by clicking here.

So is this game worth a try? Mega Man Ultra is mostly a difficulty hack aimed at giving the enemies a more challenging AI and altering the levels so that they too play a significant part in the game’s difficulty. This hack can be used to hone you Mega Man skills and but can prove to be a bit too difficult and even frustrating for less experienced players. Certainly not for the faint of heart.