Super Demo World: The Legend Continues is a ROM hack of Super Mario World created by FuSoYa and Zero-G as a demonstration of the tools available to the Lunar Magic SMW Editor created by FuSoYa.

If you want to see a video of Super Demo World: The Legend Continues in action, check out the video below. 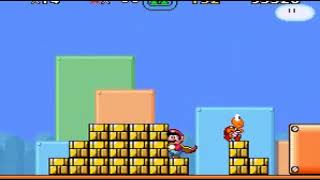 Super Demo World: The Legend Continues is a project put together with the goal of displaying the capabilities of the SMW Level Editor Lunar Magic. Super Demo World, was first released in 2001 as a few short levels to show off custom blocks which had varying requirements for when they could be broken such as the typical only when big breakable bricks or bricks that could only be broken with a fireball. Since then, the project has gone on to be a complete hack of SWM spanning across and heavily altering all of its levels. As this hack is designed with the explicit goal of showing off Lunar Magic, players will find a wide variety of challenges across Super Demo World‘s many meticulously crafted levels and will assuredly find themselves stretching out fiber of their SMW muscles along the way. Each on of the castles in this hack come with a quirky blurb at the end once you defeat the boss, many of them referring to bizarre or somewhat dark scenarios where the Koopa’s were experimenting on the eggs or simply hording them for buffets.

Super Demo World offers an altered version of the SMW title screen, as seen below. All tilesets and sprites can be found in the Lunar Magic editor which exhibits some custom assets as well as background pulled from other games. All and all, this game has some fantastic variety and visually striking levels.

Super Demo World: The Legend Continues plays almost identically to its parent game with the exception of the levels being entirely custom and as such come with a wide variety of challenges, some require the talents of veteran players to surmount. As the hack was designed for showing off as much as possible, it tends to favor flashy designs and gimmicks while sacrificing some balance and practical level design choices. Players may run into the dreaded item babysitting from time to time or come across sections of the game that can be entirely subverted via secrets and off-screen shortcuts.

This hack makes used of most of the songs from the original game while using some from other Mario titles as well. If you wish to play this game you can download the Super Demo World: The Legend Continues Rom by clicking here.

So is this game worth a try? Super Demo World: The Legend Continues is a fun and extensive hack that changes the entirely of SMW to show off all the capabilities of Lunar Magic SMW Editor. While the game tends to suffer from balance issues and relies heavily on a number of gimmicks and strangely placed items, it is a marvel to experience. I recommend not taking it too seriously (there are some trial and error portions that can be frustrating) and just sitting back to ogle at what the editor has allowed this pair of developers to create.