Extra Mario Bros is an overhaul hack of the NES game Super Mario Bros. which introduces several elements from the Metroidvania genre and implements them for a brand new experience that feels more like a entirely new game than a hack. If you want to see a video of Extra Mario Bros in action, check out the video below. 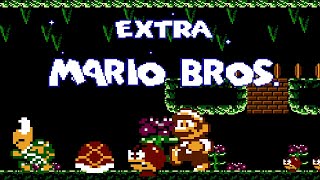 Easily one of the more innovative SMB hacks out there, Extra Mario Bros flips the traditional Mario system on its head and introduces new design and concepts every step of the way. There are handful of features present in the hack, such as the use of pipes to backtracking, that were designed as tricks to get around the limitations of the system but work to give the hack its charm. Items such as power-up that alter the way the Fireflower functions are rewards for completing certain areas of the game and become integral to completing later sections. Similarly, Keys will be found as well that unlock further sections of the game. Scattered through the hack will be new enemies and new functionalities the the player will have to adapt to. Many of the same skills from the original game will still come into play but even veteran players may take a life or two to work out the kinks of some of the new enemy types.

Extra Mario Bros has a heavy stylized version of the original SMB title screen and represents the games thematic change to something closer to a Metroidvania style. The visuals of this hack take and heavily alter the graphics from the original title providing it a much darker and almost sci-fi aesthetic.

Extra Mario Bros takes the typical platformer formula that Mario games of its era offered and alters it completely for an all new experience which serves as something of a breath of fresh air for long time SMB players. The developers of this hack have introduced elements from metroidvania to the series with items, exploration, and secrets as well as a psuedo-nonlinear design (many pipes cause you to go backward in the level, a neat little workaround to the engine’s inability to scroll left) and switches are necessary to progress through levels and act as puzzles. Extra Mario Bros presents many new sound effects and new music as well as slightly altered tracks from the original game. The new tracks really bring out the metroidvania theme that the developer was aiming for.

So is this game worth a try? Extra Mario Bros breathes a breath of fresh air into NES and SNES era of Mario games by altering is classic formula from the ground up and delivering an action-plaftormer experience foreign to the franchise during its time. Players will enjoy progressing through levels in an almost serpentine fashion and be faced with unique challenges no other Mario title of its time has offered. Combined with its unique graphics and new music, Extra Mario Bros stands out as a memorable and enjoyable experience all its own.