Zelda Challenge Outlands is a masterfully crafted hack of the NES title The Legend of Zelda developed from the ground up by GameMakr24 in the light of bringing an all new Zelda experience while maintaining the original’s pacing and challenge. If you want to see a video of Zelda Challenge Outlands in action, check out the video below. 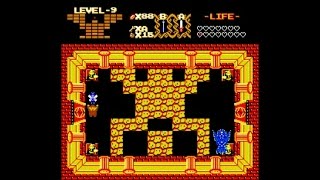 Zelda Challenge Outlands is a completely different game to the original The Legend of Zelda game. The entire game has been altered providing players with a brand new and challenging experience that feels like an expansion of the classic title. As far as fan hack are concerned, this one carries itself with the polish of an official Zelda release. Due to its focus on adhering to the original concept and spirit of its parent game, this hack presents a very similar challenge, difficulty curve, and progression system. Of all the Zelda hacks that are out there, this one is amongst the most fair (or balanced, if you will) and any Zelda fan should feel right at home.

The developers of Zelda Challenge Outlands have designed a unique title screen for their hack. There are a few graphical changes made in this hack. Many of the monsters/enemies have had their graphics reworked, including some bosses, and a few of them have had their colors changed as well.

Zelda Challenge Outlands holds true to the concepts and design of the original game and plays more like and expansion of the original than a simple hack. Players will enjoy an all new world to explore and dungeons to delve with many challenges, both familiar and new, and a familiar progression system that pushes players to explore and test their limits while incentivizing knowing when to turn back and try again later. Zelda fans will experience a wave of nostalgia as this hack focuses on preserving the heart of The Legend of Zelda.

The game has the tendency of lagging if too many sprites are on screen. Players may experience a frame rate drop when six or more sprites (dependent on the particular sprite) populate the screen.

There have not been any changes to the original game’s sound effects or music in this hack. If you wish to play this game you can download the Zelda Challenge Outlands Rom by clicking here.

So is this game worth a try? Zelda Challenge Outlands is just as timeless as its parent game, proving fans of the Zelda title with and all new experience fashioned in the vein of the original; truly, this feels more like an expansion of The Legend of Zelda and works hard to emulates the title’s spirit and design. Old fans will feel right at home traversing this new area of Hyrule, delving into dungeons, overcoming perilous challenges and gaining new power via an array of invaluable items both familiar and completely new to the Zelda experience. Overwhelmingly recommended and it is even possible to purchase a physical version of the hack for enthusiastic collectors.