Castlevania Chorus of Mysteries is an extensive hack of the NES game Castlevania, the developers of this hack have worked hard to bring players an all new game with new gameplay elements, sounds, and story. Castlevania is widely considered amongst one of the best video games of all time. It is an action-plaftormer with heavy gothic horror themes and tells the tale of a vampire hunters quest to seek out and destroy Dracula. Since its release in 1986, it has gone on to become one of Konami‘s most critically acclaimed franchises, popularize the Metroidvania genre (along with Metroid) and has spawned numerous other pieces of media such as television series’ and comic books.

If you want to see a video of Castlevania Chorus of Mysteries in action, check out the video below. 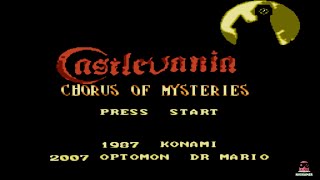 The duo of developers Dr. Mario and Optoman come together to bring fans an ambitious hack of the classic Castlevania and present a brand new game from the ground up altering not only graphics and music but items, levels, and bosses for a ‘true to spirit’ Castlevania experience. Holding true to the design and concept of Castlevania, this hack presents a fast-paced and hard hitting challenge that requires precision and awareness to master but is overall intuitive to play and easy to get in to. The new designs and concepts will easily entice veteran players who can be sure that their previously mastered skills will not go to waste. This hack feels like a spiritual successor to Castlevania offering an all new story, protagonist, and antagonist. Castlevania Chorus Of Mysteries offers a somewhat increased difficulty, likely due to the new mechanics that many of the enemies have which cause the player to think and react in new ways. This hack is certainly something to bring back the nostalgia of first attempting to perfect Castlevania.

The title screen is heavily customized from the original and emulates the Castlevania aesthetic perfectly. The graphics in this hack have been entirely overhaul with all new level designs and completely new sprites for the protagonist, monster, and bosses. Players will encounter new effects along with new weapons.

Castlevania Chorus of Mysteries plays in the vein of its parent title through it brings a number of new features to the table. A number of the weapons that were present in the original game can be found in this game as well with similar or identical functionality, however, there are also some new weapons to play around with such as Laurels, a plant that will grant your temporary invincibility at he cost of eight hitpoints. Players will also experience new enemies and bosses that function in completely unique ways apart from the enemies seen in the original game.

Castlevania Chorus of Mysteries presents all new music for each level and as well as music for the title screen that is beautifully crafted and truly reminiscent of the composition provided in the original title. So is this game worth a try? Castlevania Chorus of Mysteries is an amazing hack offering players a completely new and unique experience right down to the music. This hack could have easily stood alongside it’s parent as another release of the game and I highly recommend it to all Castlevania fans.