If you want to see a video of Super Mario Bros 64 in action, check out the video below. 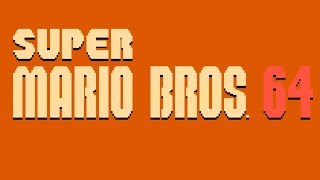 Super Mario Bros 64 recreates the NES classic Super Mario Bros. using the Super Mario 64 engine allowing you to experience the game faithfully as it was presented but with completely new graphics and then a handful of additions taking it one step farther than a simple recreation.

Aside from the graphic changes made to produce this hack, the game also plays a bit differently from the NES version. In this hack, instead of having a set number of lives, players face each level with the goal of achieving the highest score by limiting their number of deaths and by collecting as many extra lives as possible.

The pacing of this hack is lightning fast, even for a casual player like me who has no experience with speedruns. Each level, depending on how many deaths you come by, often takes little more than a minute to cruise through. This, of course, was so on the Normal difficulty. Run on the SM64 engine, this makes use of models for characters and enemies from that title while having custom tiles to recreate the levels from Super Mario Bros.

Super Mario Bros 64 plays exactly like Super Mario Bros. for the NES with few exceptions like the different character – Mario, Luigi, Wario, and Waluigi – playing slightly differently from one another due to different jump heights. While the levels remain largely unaltered and follow the same progression as the levels in the original NES game, players will find that levels seems extremely short due to character speed; this makes the game ideal for quick sessions.

I noticed a few slow down issues here and there and some clipping issues with characters being able to grab the edge of blocks and pull themselves up through another box effectively phasing through walls, but otherwise the game feels great and is suitable for casual play.

Sounds largely from SM64 are implemented in this game as well as a combination of tracks from SM64 and other titles along with some remixes.

If you wish to play this game you can download the Super Mario Bros 64 Rom by clicking here.

So is this game worth a try? Super Mario Bros 64 is an overhaul hack of and a mash-up of two Mario classics for nostalgic experience suitable for veterans and newer players alike. Each of the levels in this hack are presented just as they were in the original NES title so if you enjoyed, or still enjoy, playing through that game you should definitely give this one a try.