Smash Remix is a brilliant romhack started by JS and worked on by various other designers and hackers to bring several new playable characters and gameplay improvements to the classic Super Smash Bros. game for the Nintendo 64. Super Smash Bros., commonly simply referred to as Smash 64, is a crossover fighting game developed by HAL Laboratory for the Nintendo 64, it released in 1999 and features a cast of characters from several of Nintendo’s trademark franchises such as Mario, The Legend of Zelda, Star Fox, and more. The game was critically acclaimed for it’s original fighting game style along with its music and simple learning curve.

If you want to see a video of Smash Remix in action, check out the video below. 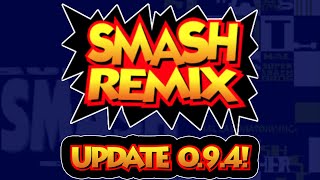 Smash Remix sets out to improve upon what could be viewed as the original Smash Bros.’ greatest drawback: its fairly limited content capacity. Several extremely talents individuals have all come together to add all new playable characters and levels to this ground breaking title. Enthusiasts of the modern Super Smash Bros. titles will recognize a number of the additions in this hack such as Bowser, Ganondorf, Dark Samus, and more. Each of these new characters have their own unique move sets to set them apart and some of them even have varied outfits/configurations such as being able to play as Giga Bowser. Smash Remix presents a slew of settings to customize the players gameplay experience such as Salty Runbacks (which allows the player to hold Start+A+B+Z+R to automatically restart a match on the same stage), customizable Stage Hazards, music changes for levels as well as menu, FPS display, and much much more.

Graphical changes in this hack are represented in the addition of several character models and SFX for those characters as well as brand new maps to battle on.

Smash Remix incorporates a number of gameplay improvements such as an improved AI and changes to character’s damage tables, as well as various options for settings and quality of life options. The developers of this hack have worked endlessly to offer a modern feel to well aged game. Overall, the developers have worked to balance the new characters with the existing ones in the spirit of fair competition and this in some aspects makes it less frustrating than the modern Super Smash games.

New characters have new sounds and a handful of new tracks have been added to the game for the sake of variety in the menus and on many levels.

If you wish to play this game you can download the Smash Remix Rom by clicking here.

So is this game worth a try? Smash Remix is truly a labor of love and has had a number of talented individuals put in hard work to bring about a much improved Super Smash Bros. game. Something to keep your eye on as the developers are constantly updating this one, I heavily recommend Smash Remix to any fan of the classic title.