Released in 2016 by the ever-inspiring Kaze Emanuar, Super Mario 64 Last Impact is a transformative ROM hack of the Nintendo 64 classic Super Mario 64 and bring the game into a whole new light with unique courses, music, objects, boss fights, and more. Super Mario 64 was a major player in the anticipation, and later on the popularity, of the Nintendo 64 system and the game has ranked amongst the greatest games of all time since its release in 1996. It revolutionized the 3-D platforming experience and has gone on to influence countless other titles and to this day it is still referenced as a timeless classic that developers study in hopes of producing another game as influential and experience defining as Super Mario 64.

If you want to see a video of Super Mario 64 Last Impact in action, check out the video below. 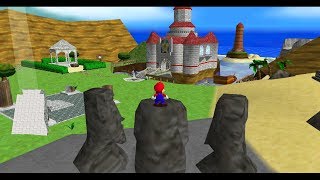 Super Mario 64 Last Impact is a one-of-a-kind hack sporting an impressive array of new features along side imaginative maps that capture the heart and soul of the original SM64 title as well as a sense of adventure and exploration feeling more at home among a full-fledged adventure title, similar to the vision of more recent Mario titles. Maybe not a huge mind blowing feature for newer Mario games, but certainly for SM64, and for a hack at that, this game features a three part story which first introduces you to your immediate task of saving Princess Peach and going on to defeat Bowser while also illuminating you to some other mysterious danger. The player will complete the first set of levels and collect the stars then be met with story progression that leads them into a second set of levels which then leads into the third and final act of the game. It’s nothing huge, but just shows the efforts and fun that went into creating this hack. As is rather common for SM64 hacks, Super Mario 64 Last Impact suffers from a fair amount of camera issues, but to be fair those issues are inherited from SM64’s own, at times, wonky camera. The issues really come in when the camera is forced to attempt to navigate some of the finer nuances of the levels which tend to flaunt some complexity. If you can get over a few frustrations here and there, that seems to be the only real shortcoming of this title within a slew of truly outstanding and inspiring work by Kaze Emanuar and cohorts. Through this hack you will find a number of new textures from the environment to new enemies. Everything has been meticulously crafted to fit in seamlessly with the existing visuals of SM64.

Super Mario 64 Last Impact adds a number of features to the game such as new powerups and enemies. Many of the enemies that will appear new to the SM64 world are actually pulled from other Mario titles, such as the Tap-Tap from Yoshi’s Island, while many others are unique creatures to present Mario with new challenges in this epic adventure. The presence of so many new enemy types presents a much needed helping of variety which helps this game seem less like just another SM64 hack.

Along with enemy variety, we get a an impressive list of new abilities for Mario to play around with in the SM64 world such as the iconic F.L.U.D.D and Yoshi as well as plenty of entirely new powerups such as the Spider Mushroom, which allows Mario to create climbable string, or the Goomba Bros. Shield, which acts as a impressive ability boost for Mario lending him a greater jump height amongst other things.

This ROM hack offers plenty of new original music to SM64 along with songs pulled from other popular titles as well as remixes of well known Mario tracks. I’ve seen many a hack miss the mark in terms of matching the new music to the game’s atmosphere, but the team of composers who worked on the music for this hack did an impressive job here. If you wish to play this game you can download the Super Mario 64 Last Impact Rom by clicking here.

So is this game worth a try? Super Mario 64 Last Impact is a must play for any enthusiastic SM64 player out there who is looking for an all new experience and adventure to remember. There isn’t much else to say here expect that if you are opting out of this one then you are truly missing out.