It is reasonable to consider Donkey Kong Country to be Rare’s chefs d’oeuvre as it is most certainly the game that gained them recognition as one of the video game industry’s leading developers at the time. Released in 1994 for the Super Nintendo Entertainment System, this pre-rendered 3D graphic platformer reestablished the Donkey Kong franchise for Nintendo. While initially critically acclaimed for its innovative graphics and addictive gameplay, amongst other things, critics have come to regard the game as somewhat overrated, stating that it’s flashy graphics and straightforward gameplay ring shallow in comparison to the standards set by other Nintendo titles of the time.

If you want to see a video of Donkey Kong Country Boss Blitz in action, check out the video below. 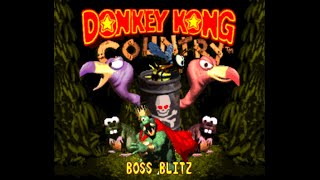 Donkey Kong Country Boss Blitz is a fairly simple ROM hack that allows the player to test their mettle against all the bosses of DCK without the need to play through the entire game. A few different options are at the player’s disposal to decide what kind of challenge they are willing to face; you will have the option of facing the seven bosses consecutively or simply choosing one to brush up on. Also, players can choose whether both Donkey and Diddy are playable or one or other, effectively increasing the difficulty. Each defeated boss will be saved by the game marking the time it took to defeat that boss. On a successful seven boss run, the game will show all your times and save that out for all your bragging needs.

The title screen of this game is greatly altered from the base game, as seen below. The hack creator has included color alterations for Donkey and Diddy similar to the colors one would see in Super Smash Bros. There are also minimal changes made to the animation in attempts to improve their smoothness.

Donkey Kong Country Boss Blitz is identical to the base game if you removed all the levels and simply bit the player against boss after boss to reach the climax. The hack retains the co-op capability of the original game, allowing for you and a friend to stomp bosses together.

The hack creator notes that he has made some fixes to sound effects of the game but otherwise all sounds and music in this hack are unaltered from the original game. If you wish to play this game you can download the Donkey Kong Country Boss Blitz Rom by clicking here.

So is this game worth a try? Donkey Kong Country Boss Blitz offers a unique experience aside from the traditional DKC gameplay and provides players with a quick and simple boss run scenario perfect for killing a few minutes or challenging a friend.