Zelda II Rev Edition is a ROM hack created by Revility of Zelda II: The Adventure of Link which significantly alters the graphics of the game in order to make it appear more like its predecessor, Zelda 1. If you want to see a video of Zelda II Rev Edition in action, check out the video below. 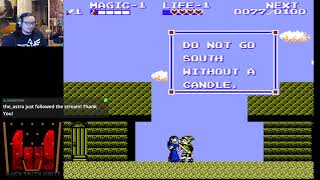 Zelda II Rev Edition started off simply as just a few changes to Link’s sprite in the game and would later go on to become the expansive graphical overhaul hack that we see today. The hack creator, like many others, felt that Zelda II did not quite hold up to its predecessors visuals and instead took a few steps backwards and so he set out to update the games graphics to appear more like the first Zelda title and even upgrade many of the graphics to appear completely new to the series. Outside of graphical work, Revility extensively combed through the game’s dialogue provided by townspeople and altered much of the text so that it is more clear and directly helpful to the player. This is an important change especially for players not intimately familiar with the game as this dialogue was the original way to discover where to go, where to find necessary items, and leads to other secrets in the game. Zelda II Rev Edition breathes some new life into Zelda II as it is sadly considered one of the least visually appealing Zelda games to come out in its time. Players will enjoy a much improved graphical experience while reliving an adventure that was still well worth the Zelda name.

Some minor changes were made to the title screen, as seen below. This is mainly a graphical overhaul hack and as such most of the game has been changed from start to finish, this includes changes to the color of tiles and sprites as well as some major alterations to the appearance of sprites (such as Link’s sword being change to…well, look like an actual sword).

Zelda II Rev Edition includes a number of minor changes to the gameplay such as tweaks to the costs of spells which serve to make the game a little easier and less frustrating. The hack creator stated that it simply felt too costly to use spells as they were in the base game. Other tweaks include changes to Link’s defense, so he takes a little less damage, and adjustments to the block height of Link’s shield to give him a larger defensive range.

No changes were made to the sounds or the music in this hack and remain the same from the initial release of the game. If you wish to play this game you can download the Zelda II Rev Edition Rom by clicking here.

So is this game worth a try? Zelda II Rev Edition is a beautiful overhaul of Zelda II bringing to closer to its predecessor and successor with greatly improved visuals and changes to a number of sprites so that they more closely resemble the sprites of Zelda I. Overall, the gameplay us much the same, with only a handful of tweaks here and there to alleviate some of the issues of the base game. Zelda II Rev Edition is highly recommended for those looking for an authentic Zelda II experience.