Mega Man X Corrupted is a massive fan-made project based on the framework of the SNES Mega Man X series games, it has been in development by John K. Bacchus (alias: JKB) and a small team, JKB Games, since 2009 and proceeds to garner the attention of Mega Man fans everywhere.

The Mega Man X series is an action-platformer series first released in 1993 and quickly became one of the SNES’s premiere series’ leading to several sequels all the way up to the most recent Mega Man X8 released in 2005. Lately, Capcom has focused its efforts on rereleasing the old games with their Mega Man X Legacy Collection releases for the eighth generations consoles.

If you want to see a video of Mega Man X Corrupted in action, check out the video below. 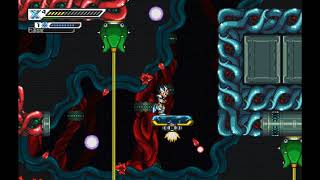 Capcom has decided to turn their efforts away from new Mega Man games and instead has jumped on the “rerelease/remaster” wagon. While this is all good and well, fans are beginning to feel starved for new content. Luckily, dedicated developers and fans with the talent have been willing to fill that gap and sate their fellow gamers.

The game takes direct inspiration from Mega Man X8 which introduced the feature of swapping armor components. X will have two suits that are customizable in this manner. Zero will also have a few different suits available to him which will grant him abilities and boosts but cannot be customized in the say way. With all new level design, enemies, abilities, and a story of its own, Mega Man X Corrupted presents itself as a entirely new Mega Man experience and even goes as far to venture into untrodden ground brining Metroidvania-style mechanics to the franchise.

As the game is still in the works with no defined release date, a title screen as not yet been officialized.

A tremendous amount of work has gone into this game to mimic the art style and design of the Mega Man X series on the SNES. Besides new tilesets and enemy sprites, the developers have also created all new animations for a variety of characters.

Mega Man X Corrupted aims to offer an experience unlike any other in the MMX Series. Players will be presented with an all new system designed around experience and upgrades and the game opens up the typical semi-linear gameplay by presenting a singular map with multiple fast-travel points where players will be able to freely travel and progress by attaining new abilities that must be utilized in specific scenarios to succeed.

X and Zero are designed to play fundamentally different from one another with X relying on his X-Buster and the plethora of upgrades that can be gained from defeated Reploids, while Zero relies on his Z-Saber and a combo system that allows him to release devastating close-range attacks.

Mega Man X Corrupted presents its own unique soundtrack composed by Dominic Ninmark. Just like the rest of the game, it takes strong inspiration from the SNES Mega Man games and attempts to emulate its aesthetic while offering a remixed touch. Unfortunately, at this time, Mega Man X Corrupted is not available to play as the game cannot be found anywhere for download. You can check out their official streams which go live each Friday here.

So is this game worth a try? From what has been presented from the developers to this point through their numerous videos and streams displaying their work, Mega Man X Corrupted looks to be wrapping up to be the biggest launch of a Mega Man game we will see since X8. JKB Games regularly keeps the community updated on their progress and fans remain excited and anxious for any official statement regarding a beta release. To keep up with the slew of features being worked on, one would do best to direct their attention to the Mega Man X Corrupted page on Fandom which is meticulously informative and updated.

If you manage to get your hands on a beta copy of this game (officially, of course), broadcast it to the world. Fans are eagerly awaiting this illusive masterpiece.