If you want to see a video of Super Mario World Co Op in action, check out the video below. 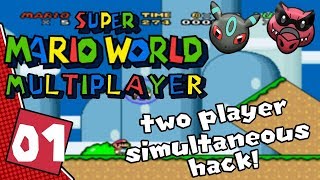 Super Mario World Co Op brings to players the experience they had always hoped for when the game first came out and before the Wii game was released finally fulfilling the much sought after multiplayer experience in the classic, side-scrolling platformer. Mario and Luigi throw their combined efforts at every original SMW level, simultaneously bashing enemies and bounding across the Mushroom Kingdom in the hopes of rescuing Princess Peach. Super Mario World Co Op holds onto the core gameplay of SMW without altering too much and preserving its classic pacing and charm. Veteran players may notice a slight increase in difficulty without the assistance of Yoshi and the added factor of another hero crushing enemies and sharing powerups.

No changes were made to the title screen of the original game in this hack. There are a handful of graphical glitches associated with Super Mario World Co Op which are not game breaking or necessarily impeding but make for quite the experience. Most often, I witnessed that power-ups glitch on both Mario and Luigi, with the latter sometimes appearing as though he was not powered up.

The major goal of Super Mario World Co Op was to bring a completely simultaneous co-op experience to Super Mario World. For the sake of balance, a number of the game’s mechanics have been altered, e.g. Yoshi is not present at any point in the game instead replacing the points where he would come out of blocks with 1-UP Mushrooms.

While enjoyable, the game has a number of glitches that make it rather frustrating at times. Most these glitches apply to Luigi who, at times, has the habit of phasing through objects…and sometimes enemies. The extra 1-Up Mushrooms become absolutely necessary due to the number of lives that Luigi will be robbed of.

Another feature from Super Mario Bros. Wii that was implemented is that the dead player will float in from off screen to rejoin the level when they die. It’s a neat feature but needs tweaking as there are no invincibility frames to protect the player while they regain their bearings.

No changes to the games music or sound effects were made in this hack. If you wish to play this game you can download the Super Mario World Co Op Rom by clicking here.

So is this game worth a try? Super Mario World Co Op is definitely worth checking out for veteran SMW players and newbies alike. There has always been something about couch co-op games that are that much more enjoyable and appealing and this game is no different. Grab a set of controllers and take on the puzzles and challenges of the Mushroom Kingdom. This hack will certainly entertain, but it is worth noting that a number of glitches are still present (and may remain so without further development), as such, the hack may take some extreme patience and dedication to complete.