Metal Sonic Hyperdrive is an overhaul romhack of the 1991 Sega classic Sonic the Hedgehog created by Lone Devil and contains all new levels, music, and gameplay. If you want to see a video of Metal Sonic Hyperdrive in action, check out the video below. 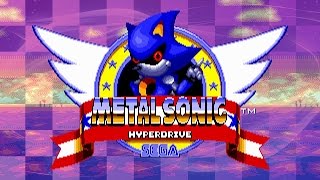 Metal Sonic Hyperdrive is the tale of not the Metal Sonic we know but an alternate version of Metal Sonic created by Tails after the latter stole Metal Sonic’s development plans from Dr. Robotnik. Tails gifted this new Metal Sonic with the heroism and behavior of Sonic and sent this new hero to Robotic Isle to recover the Chaos Emeralds and put Dr. Robotniks plans to and end. Play as the robotically superior version of Sonic capable of anything his organic counterpart can muster as well as much more. Metal Sonic has his own version of the Spindash as well as the Super Peel Out present in Sonic 3. The developer has also included Super Metal Sonic into the game via collecting six Emeralds and obtaining 50 Rings (identical to Sonic 2). Explore an all new environment riddled with new enemies and dangers unique to the Sonic titles spanning the Sega Megadrive console. Each of the levels have been expertly crafted to emulate the original Sonic aesthetic. The romhack developer has crafted each of the levels in this game using custom tilesets and assets creating a unique set of levels for Metal Sonic to traverse through that replace each of the six levels present in the original game.

Metal Sonic Hyperdrive is a completely new game based on the design and concepts of the original Sonic title. This hack boasts levels that are larger and more complex than its parent game giving players a fair amount of room to explore and play around with if they are not focused on the speed run. The developer has also included a number of new items to pick up along the way such as the Golden Shield which absorbs nearby Rings as you pass them by, and a monitor on each level that unlocks the Giant Ring necessary to collect the Chaos Emeralds.

If playing as Metal Sonic wasn’t enough, the developer has also included a number of extra character in the game that can be accessed via a special menu allowing you to play as Sonic himself or other video game icons such as Kirby.

This hack contains custom music as well as some song selected from other titles, such as Shinobi III, and some sound effects used from other Sega titles games.

If you wish to play this game you can download the Metal Sonic Hyperdrive Rom by clicking here.

So is this game worth a try? Metal Sonic Hyperdrive