Mario Adventure is large romhack of Super Mario Bros. 3 for the Nintendo Entertainment System created by DahrkDaiz and significantly alters many aspects of the game to create something almost entirely new with new graphic, enemies, powerups, and much more. If you want to see a video of Mario Adventure in action, check out the video below. 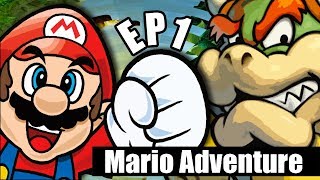 Mario Adventure is easily one of the greatest NES hacks of all time and stands out as a must for any fan of Super Mario Bros. 3. This hack sets out to change nearly all aspects of the original game by changing levels, items, enemies, and a number of base game functionality. Most notably, most levels in this hack end with a mini boss fight.

With all new level design and some added variety one would not expect from the typical Mario game, this hack can prove to be a tad bit more difficulty than its parent title. This is somewhat balanced out by the changes made to powerups and the ability to store powerups for when you really need them. Mario Adventure throws out the typical linear progression of NES Mario titles and opens up all of the worlds for the player to take on whenever they feel like it. The main goal of the game is slightly different than ususal, requiring the player to seek out hidden keys in order to progress to the game’s finale.

A slightly altered title screen is present in this hack as presented below. Due to the nature of new levels and enemies, many graphical changes have been made in Mario Adventure. Most of these changes are to tilesets and color palettes and the changes that you will notice to the Hubworld and Overworld sections of the game.

Mario Adventure does a lot to change the base functionality of the original Super Mario Bros. with various additions and alterations. Some of the biggest changes to the game include: infinite lives; a Hubworld where all worlds can be accessed at any time; significantly improved powerups such as the Fire Flower providing increased jump height and fireballs that travel in a straight line; Kuribo’s Shoe can be stored and accessed throughout levels; and more. The game also allows the player to store one powerup so that they may switch between them at any time or access a powerup when they are in a tough situation.

Ultimately, the core gameplay is very similar however players will note that each level tends to end with a mini-boss battle and the overall goal of each world is to find a hidden key which is necessary in order to access the final 8th world and beat the game.

A number of melodies have been altered slightly for this hack and some new sound effects added as well. If you wish to play this game you can download the Mario Adventure Rom by clicking here.

So is this game worth a try? Mario Adventure is a must for all Mario fans as it adds a slew of new content to an already fantastic timeless classic. If you have ever wanted to relive the days of playing through Super Mario Bros. for the first time, this hack shakes up the base game just enough to scratch that nostalgia itch while proving new and interesting features for players to enjoy.