Sonic Classic Heroes is a combination of two romhacks, Sonic 2 Heroes and Sonic 1 And 2 by flamewing and ColinC10 respectively and serves as a single romhack offering the entirety of the campaigns from the first and second installments of Sonic The Hedgehog. If you want to see a video of Sonic Classic Heroes in action, check out the video below. 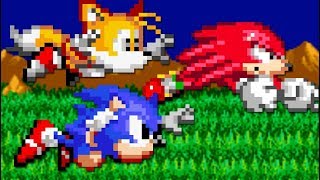 Sonic Classic Heroes was initially started as Sonic 2 Heroes by flamewing until community suggestions prompted the developer to collaborate with fellow romhacker ColinC10. This dream project is a massive combination of the first two Sonic titles and also incorporates many aspects from Sonic 3, Sonic & Knuckles, and Knuckles’ Chaotix.

A key part of this hack was implementing the new characters fully into the game with their own special functionality while also pushing the idea of traversing each level with a party rather than simply having a more-or-less useless sidekick following in your wake. Teams will be allowed to switch between party members at will and some can even interact with on another.

Sonic Classic Heroes also presents the players with a number of options before starting the game such as a stage select and a team select. Players can rush forward with a full party of three or take on a greater challenge with two members or even one alone. Furthermore, each character is capable of collecting Chaos Emeralds and unlocking a Super form.

Sonic Classic Heroes has a unique title screen to set it apart from its parent titles. The developers have added each of the 4 new playable characters’ models into the levels for both Sonic 1 and Sonic 2, this includes art on victory screens and items such as extra lives as well as the

Sonic Classic Heroes plays much like the original games with a few exceptions in the form of characters’ individual abilities, such as Knuckles’ glide or Charmy’s flight ability. These additions lead to a great deal of variety in gameplay and also promote varying tactics for facing any form of challenge. One thing to note is that the extra abilities greatly depreciate the game’s difficulty as any challenge tends to become more or less negligible, not to mention the ability to swap party leaders at will while in single player allows the player to avoid losing lives if timed correctly.

Every level in Sonic 1 and Sonic 2 remain unchanged in this hack so for veteran players the real enjoyment will be in testing out the new characters and adapting tactics.

Most of the sounds remain the same in this hack with the exception of a few sound effects. If you wish to play this game you can download the Sonic Classic Heroes Rom by clicking here or play it online.

So is this game worth a try? Sonic Classic Heroes easily stands as one of the greatest Sonic romhack of all time for not only combining two wonderful titles into a single game but also expanding the roster and abilities available to each character. The developers had mentioned a much larger cast of characters, bringing characters such as Amy Rose and Cream the Rabbit. One can only hope that they continue this project or someone else picks up the baton to take on the future plans.