Alien 3 – Kinoppi Version is a fan-inspired rework of the mechanics of the Sega Megadrive run and gun style game Alien 3 released in 1992. Another game that is remembered for it’s difficulty and loved by its fans even though the majority of them struggle to make it to the later half of the game. These hacks are something of a god-send. A change of tactics brings a new experience to the game and increases the players chance of completion.

Below is a Youtube video of Alien 3 – Kinoppi Version 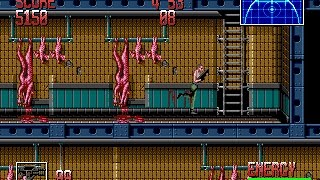 Coined as the Kinoppi Version, this alteration to the classic Alien 3 game removes the ever present nuisance that is the games level timer and improves on a handful of other gameplay mechanics in order to enhance the gameplay experience overall and lean the game toward a more “casual” experience. The developer has tweaked ammo capacity for all difficulty levels, providing more for lower difficulties and vice versa. This point alone rebalances the game and seems more appropriate for the chosen difficulty. In the original Alien 3 it could easily feel as though you were counting bullets. Take the game at a leisurely stroll and learn how best to deal with the many challenges presented. Ideal for anyone who does not enjoy constantly playing a pseudo time-attack mode.

This hack improves on another hack called Survival Mod which attempted to create a solution for the racing clock, that hack was reported to have some issues with various emulators and this hack was created in response. Otherwise, it features all the same alterations from that hack.

There were no alterations made to the title screen of the Alien 3 game. All graphics in the game remain intact as they were originally presented in the game’s release. There were minor text changes made in the game mostly to clarify UI elements and dialogue.

Alien 3 – Kinoppi Version offers a much less difficult experience from the original game by making tweaks to a number of elements. Adjustments made to elements such as the health benefit of Health Packs alleviates a degree of dread the player may go through and removing the need for batteries puts an end to what could turn out to be a frantic search for resources. Most importantly, giving the player unlimited time to explore the level stops the inevitability of rushing into the unknown and subsequently getting tackled by three or four aliens at once.

No changes to the sound track or the sound effects in Alien 3 were made in this hack. So is this game worth a try? This provided some substantial alterations to the core gameplay experience which can take away some of the more challenging aspects of the game; however, it could be argued that all the changes only help the game be truly enjoyable rather than stress inducing. Definitely a must for those looking to have a more calm experience or those looking to perfect their gameplay for future speedruns.