Comix Zone Calcium Kid Edition is an enhancement hack of the classic title Comix Zone on Sega Megadrive with the goal of increasing the survivability of the hero. This hack takes a little joke and runs with it to reskin Sketch Turner as The Calcium Kid whose bones are much more dense and sturdy and able to take more punishment.

Below is a Youtube video of Comix Zone Calcium Kid Edition. 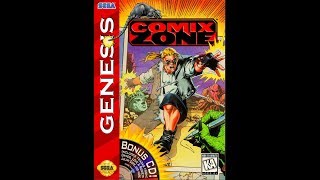 The Calcium Kid Edition for Comix Zone gives Sketch, the hero, greatly improved survivability for an improved gameplay experience and a better shot at reaching the final boss in what was a classically difficult game. There are plenty of difficult older games out there, in fact it would seem that most older games possessed a difficulty standard that has faded out as games have progressed, this hack provides players with an excellent tool for perfecting their gameplay. New players could benefit from the lack of rage quitting as well. Micromanaging health in Comix Zone can be a pain especially when faced with the reoccurring obstacle of being forced to break open objects and walls to progress in the game. Thanks to the Calcium Kid Edition hack, players can enjoy a challenging run with all the original opponents without worry about being inevitably defeated by a steel barrel.

There are no noticeable changes to the title screen from the original release of the game. The only graphical changes present in this hack are simple changes to text, altering some dialogue to reflect the joked of Sketch being called “Calcium Kid” as well as other milk related puns. Health items, which were originally Iced Tea, have been reskinned as Milk Bottles.

In the Calcium Kid Edition hack there are a few changes made to the gameplay in order to create an ‘enhanced’ experience for the player; ultimately, the aim appears to be to make the overall experience of the game more forgiving. Players will notice that objects like walls, barrels, rocks, etc. no longer reduce the player’s health. The player can feel free to attack objects for extra items and passage ways without worrying about conserving their health.

Furthermore, health object, Milk Bottles, in the game now fully heal the player for a much improved experience moderately mitigating the threat of constant death.

There are no changes to Comix Zone‘s original audio provided in this hack. So is this game worth a try? This is an enhancement hack on a classic game that was moderately difficult to get all the way through on the three retries provided. Objects in the game world were useful for producing extra items and passage ways for the player but needed to be balanced against the amount of health the player had remaining. Now with this hack in place, the player no longer needs to worry about persevering their health in case kicking a barrel may kill them. Highly recommended.

At the end of the day, it should be noted that this is a compilation of hacks with minor edits made to alter some text. It is possible to find these hacks without the Calcium Kid joke stretched over it.