Zelda Parallel Worlds is an overhaul hack for the SNES game Zelda: A Link To The Past released in 1991 (1992 in North America), it aims to bring an all new experience to the classic game for timeless fans. The Legend of Zelda: A Link to the Past is an action-adventure title and the third in the Zelda series. Considered to be one of the greatest games of all time, this game, and the Zelda series in general, has garnered a colossal fan backing sprouting overwhelming amounts of fan-made works just like this hack presented here.

If you want to see a video of Zelda Parallel Worlds in action, check out the video below. 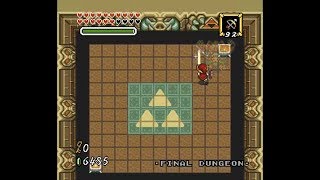 Zelda Parallel Worlds was once known as Tower of The Triforce, which was the original demo released by Euclid. The original release of this hack is the result of long hours of hard work over roughly four years and the dedication shows in its quality and overall likeness to the classic Zelda experience. Since then, the hack has received numerous updates and patches to further improve on its quality. This hack emphasizes bringing new depth and challenge to Zelda: A Link To The Past. The developers themselves state that it is almost necessary for a player to be intimately familiar with the game and its tricks to have a chance at success. “You moved here from another land with a friend to find treasure. Not long after your arrival, a lot of strange occurrences started.”

This hack includes many features from The Legend of Zelda: Ocarina of Time, such as the shields’ appearances, the screen layout, and a day/night cycle.

This hack offers its own customized title screen displaying not only the correct title for the hack but also the developers as well as the time of development for the current release. Many of the graphical elements have been altered in this game to fits the new dungeons, caves, etc. There have been changes to sprites and all manner of environmental elements.

Infamous for its sheer difficulty, Zelda Parallel Worlds throws the player into the deep end with little to no time to acclimate. This can be argued as being meant to challenge veteran players that are intimately familiar with the game.

Many players have referred to this hack as seeming like an ‘Expert Mode’ and rightly so as it is quite possible, even likely, to be defeated in the first set of dungeons. Furthermore, the game presents an excessive amount of backtracking where key items are collected several areas ahead of where you need to use them. These two observations are amongst the most common and for these reasons the hack includes a walkthrough of the introduction sequence which should help players at least get on their feet and prepared for the game to come.

A very talented contributor by the name of Richyawyingtmv (name pulled from the credits) designed new music for this hack that appears in various parts of the game. Veterans of the original Zelda game will likely be able to pick out these wonderful works as soon as they hit the ear. So is this game worth a try? Zelda Parallel Worlds is an impressive overhaul hack that is not for the faint-of-heart. The developers of this hack have completely redesigned the maps of the original game, Zelda A Link To The Past, as a way to provide long time fans a brand new experience and challenge to dive into. Zelda Parallel Worlds presents itself as a mountain to be conquered where the enjoyment comes from appreciation of the struggle one had to face along the way. Definitely recommended for challenge seekers and veterans.