Super Metroid Redesign is a total overhaul ROM hack of Super Metroid by Drewseph with major coding done by Kejardon, MathOnNapkins and Jathys. If you want to see a video of Super Metroid Redesign in action, check out the video below. 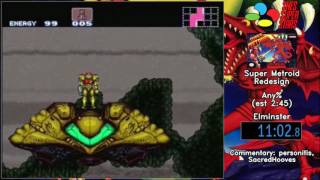 Super Metroid Redesign started as a simple project that the developer began as an introduction to SMILE (Science and Math Investigative Learning Experiences Program). Initially this took the form of rearranging and reworking a number of the rooms in various areas of the map which then led into expanding the rooms and the map entirely. Eventually, Drewseph set out to redesign the entirety of Super Metroid until we ended up with the project we have today. With an all new map, new physics, and new items and abilities, veteran players will be stepping into a completely different world of Super Metroid than they are used to with plenty of new tricks to learn along the way.

Whether intentional or not, this hack proves to be much more difficult than some others out there and definitely more difficult than the original game by a few measures. Whether it’s backtracking through the expansive map, bashing your head against the wall jumping feature, or trying to relearn bomb jumping under the new gravity, this hack will definitely have you dumping in every ounce of your concentration.

A palette swapped Super Metroid title screen is present for this hack, as seen below. This hack provides a palette swap to a number of sprites and other assets from the original game but otherwise retains all of the games’ original graphics.

The developer of Super Metroid Redesign decided to make a drastic change to the games physics, namely fall speed, for personal reasons. This in turn makes a huge difference to a lot of tricks and the timing that many players would have learned from the base game and causes player to have to approach this game with a bit more thought and consideration until they get a feel for the new gravity. Secondly, the developer emphasized wall jumping and crafted it into a much more integral part of the game as well as made the wall jumping a bit more difficult to get a hang of; as such, this hack has received varied criticism regarding this.

All the original sounds and music from Super Metroid remain in this hack. If you wish to play this game you can download the Super Metroid Redesign Rom by clicking here.

So is this game worth a try? Super Metroid Redesign is the hack that many hackers out there praise for being the one that got them started hacking in the first place. This hack stands firm as one of the most iconic Super Metroid hacks out there, to this day, and I imagine it will remain that way. Although it gets plenty of criticism for the physics change and the reliance on wall jumping to access crucial parts of the game, this hack has a strong place in the heart of the hacking community.