Hyper Metroid is a ROM hack, created by RealRed, of the original Super Metroid and a complete overhaul of the game offering a dark twist on the original Metroid storyline. If you want to see a video of Hyper Metroid in action, check out the video below. 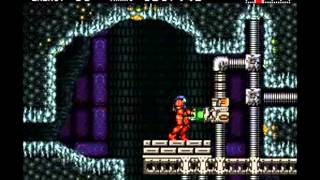 Hyper Metroid completely alters the map of the original Super Metroid opening the player up to a completely new adventure and exploration. The developer of this hack has painstaking toiled over the levels of this game to ensure that the difficulty of this game matches the difficulty of the original game as to be suitable to all skills levels of players. The story of this particular had takes an interesting turn in regards to the tale of Samus setting Adam, her CO, up as her SO with the two of them aspiring to create a family together. Just when thing were looking up for their goal together, Space Pirates raid her colony, kill everyone, and cause her to miscarry her would-be child. From here Samus sets out on a revenge path, uses a Metroid as bait to lure the Pirates out, and proceeds to reap. I’m not sure what I was expecting from a “dark twist” but this one caught me off balance. Hyper Metroid recreates the entire game from the ground up even going so far as to include new illustrations into the opening cinematic and it changes the way the opening level plays out as Ridley shows up to snatch away the Metroid. With the sheer effort put into crafting a custom beginning to this classic game, I have to tilt my hat to this developer.

Hyper Metroid has a slightly altered Title Screen as compared to the original game, as shown below. Palette changes were made in this hack but otherwise the hack uses all the same sprites and tilesets of the base game.

Players of Hyper Metroid will notice a slew of changes made to the game but to me one of the most outstanding changes was the alteration as to how ammo pools are treated. In Hyper Metroid all sub-weapons pull from the same ammo pool meaning that your resources are significantly more scarce than the base game. That said, weapons have slightly altered functionality as well, the default beam firing much faster than in the original, and it is no long possible to use all beam upgrades concurrently.

This hack retains all the same sounds and music of the base game. If you wish to play this game you can download the Hyper Metroid Rom by clicking here.

So is this game worth a try? Hyper Metroid is a lovingly made hack that takes great time and effort to crafts a new and improved Metroid experience while working to retain much of the same concepts and overall aesthetic of the title. This hack feels like another installment into the Metroid series, if not from something of an alternate universe perspective. Definitely recommended for veterans and newbies alike.