Something of a cult classic, Zombies Ate My Neighbors is a run-and-gun style video game developed by LucasArts and published by Konami for both the SNES and the Sega Mega Drive. The game was not much of a commercial success but became beloved for its graphics, humour, and surprisingly deep gameplay.

If you want to see a video of Oh No More Zombies Ate My Neighbors in action, check out the video below. 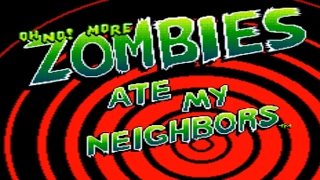 Known as the hack that took the longest to release of all other hack of this game, Oh No More Zombies Ate My Neighbors was in the works for around 10 years before it saw the light of day and when it did finally reach the public, it did not disappoint. This hack adds a truck load of new levels, many of which being much larger than the maps present in the original game, as well as some much needed features. One of the greatest additions to this hack has got to be the quality of life feature added that allows the player to reverse cycle through their inventory instead of having to slowly cycle forward and all the way back around if, god forbid, you accidently pass the item you want. It’s things like this why hackers are some of the greatest people alive. For a degree of added variety and challenge, each level starts the player off with random items and weapons. This can be extremely helpful or horrible hindering as it is possible spawn with nothing of which to defend yourself with.

This hack offers a slightly altered version of the title screen from the original game, as seen below. Very few graphical changes were made in this hack with only a few color changes made to existing sprites and other assets.

Oh No More Zombies Ate My Neighbors improves upon the mechanics of the base game by adding a handful of inspired features to the game as well as a new enemy type and new weapon. The developer has also added back in some things that were removed from the games final release such as the banana weapon, which was replaced with the popsicle and dummied out of the final release has been added to the game.

Even though the levels are greatly expanded and varied, a handful of them hack an unnecessary amount of empty space to the point where they feel unfinished.

Oh No More Zombies makes use of unused music included in the ROM but otherwise contains all the same sound effects and soundtracks that were present in the original game. If you wish to play this game you can download the Oh No More Zombies Ate My Neighbors Rom by clicking here.