Super Mario Kart 20XX is a ROM hack, created by Cocatriz, of the Nintendo classic Super Mario Kart which converts and adds tracks to the game for a brand new, more difficult, racing experience. If you want to see a video of Super Mario Kart 20XX in action, check out the video below. 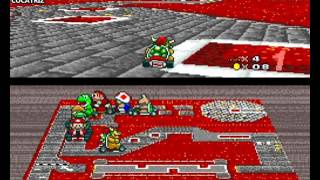 Super Mario Kart 20XX seems to have been created with the object point in mind to make the game more difficult and I would say that the creator has done a stellar job at that. Each track seems to contain all the hardest parts you could have picked out of the original SMK and thrown them in wherever possible. That said, the tracks remain fair and completely possible they simply require a greater skill level than it would take to burn through the majority of SMK. Naturally, this hack is packed to the brim with shortcuts on every track, a feature from the original game that serves as something of a badge denoting that a player is not only familiar with the game but has the skill to reliably pull off shortcuts without negatively impacting their play.

This hack provides a slightly altered title screen from the original game, as depicted below. The graphics of the original game remain unaltered for this hack.

Super Mario Kart 20XX is much more difficult than your traditional SMK. Not for the average SMK player, or even for some players that may consider themselves stellar, these tracks require an advanced knowledge and usage of drifting even on 100cc. That said, if you were looking to train up for some sort of competitive SMK event, this will certainly challenge you to improve.

All sound effects and music have remained unchanged in this hack. If you wish to play this game you can download the Super Mario Kart 20XX Rom by clicking here.

This hack is getting an updated version as noted by a video from the creator. The newer version is sporting new graphics focusing on altering the aesthetic and giving the hack a personal feel.

So is this game worth a try? Super Mario Kart 20XX is mostly a difficulty hack but also offers some variety from the original game by introducing new tracks and emphasizing the usage of shortcuts. This emphasis coupled with the improved AI creates for a much more challenging game which requires the player to develop and utilize skills to a greater degree than the base game would have required. Definitely a recommended for players out there who consider themselves SMK pros.