Project Base is a ROM hack of the SNES classic Super Metroid by begrimed and offers a completely new experience with graphical touch-ups, level edits, smoother mechanics, and more. If you want to see a video of Project Base in action, check out the video below. 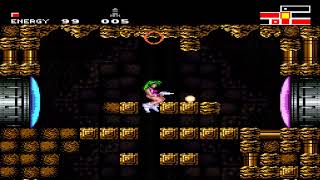 Project Base is something akin to a Super Metroid 1.5 as it looks and plays much the same as the original came with some modifications here and there to create a slightly more intuitive and “modern” game with smoother mechanics. This hack was initially meant to be a simple base hack for others to work off of – Hyper Metroid used this hack as a base – but eventually went on to become its own full experience after the developer was inspired by Vanilla++ by squishy_ichigo. The developers focused on keeping the majority of the map the same and ensuring that players did not need to master advanced techniques in order to beat this hack.

Project Base sets out to add a slew of new abilities and improved mechanics to the game in order to create a smoother playing experience with varied decisions when it comes to approaching certain challenges. Over time, this hack has become particularly popular amongst speedrunners to which the developer smiles upon and thanks these individuals as he uses the footage to help sort out bugs and create an overall better game.

The original title screen for Super Metroid remains unchanged in this hack.

Project Base offers slightly improved graphics from the base game with improvements to the color as well.

Project Base adds a handful of new abilities to the game such as a back flip which can act as a quick retreat or a most horizontal long jump. Other abilities include Bomb Skipping (avoiding bomb jump), Quick Morphs in the air and on the ground, Up Spin (a high straight jump), and more. Along with these changes the player will find a number of enhancements to the equipment that is offered in Super Metroid such as under water wall jumping, charge beam absorbing nearby ammo and creating a vortex effect on enemies, and much more.

The difficulty of the game is designed to be akin to its parent game though many have stated that the changes in abilities have made the game a fair amount easier than the original.

No sound was altered for this hack of Super Metroid. If you wish to play this game you can download the Project Base Rom by clicking here.

So is this game worth a try? Project Base is overall and improvement to Super Metroid in order to create a game that is more fluid and in many senses more intuitive for the player. While the hack does not alter much of the levels or add much new content to the game, it is a great improvement on a timeless classic and recommended for any Metroid veterans looking for a slightly altered experience on their next playthrough.