Mega Man X3 Zero Project is an elaborate enhancement hack for the SNES game Mega Man X3, its aim is to implement a wide array of features, improvements, and tweaks to the original game while also presenting Zero as a playable character from start to finish. Known by the name Rockman X3 in Japan, this SNES superstar was originally released in 1991 as the third and final Mega Man X series game to release on the system. It was critically acclaimed for its tried and true action-platformer gameplay though some fans found the game too similar to its predecessors stating that it offered little new to the franchise.

If you want to see a video of Mega Man X3 Zero Project in action, check out the video below. 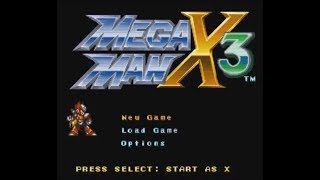 Mega Man X3 Zero Project is an extremely ambitious hack that takes the character of Zero and escalates him from a secondary character to a primary character alongside X. Many aspects went into consideration when implementing Zero into the game as a primary character giving him access to similar sub-weapons and upgrades that are available for X as well as providing him a number of unique skills and stats to set them apart from one another. This hack presents an absolute truckload of features from quality of life elements such as displaying Chip Upgrades within the in-game menu, to gameplay improvements such as an alternate way to collect the Golden Armor. I highly recommend giving the readme file a good once or twice over.

There have been some minor changes made to the original game’s title screen such as replacing “Password” with “Load Game” to reflect the new Save/Load system. Very minor graphical changes were made in this hack such as updating X’s face in the introductory sequence.

Mega Man X3 Zero Project completely removes the old password system for preserving your progress and replaces it with a save/load system. There can be a total of twenty saves at any given time and each displays game data such as upgrades, number of lives, bosses defeated, etc.

The developers of the hack have completely fleshed out dialogue for playing Zero in every section of the game, giving him all new lines that suite his character. Furthermore, Zero has a plethora of unique skills and traits that make him feel different from X and letting them both stand out as primary characters.

Zero can collect and upgrade just like X, with a few differences, and it is completely possible to only play as Zero for the entirety of the game (barring scenes were it would normally force you to temporarily change characters).

There were no changes made to the music or sound effects in this hack. So is this game worth a try? Mega Man X3 Zero Project is widely considered to be the superior version of Mega Man X3 out there and a hack that any fan should be seeking out and implementing without a doubt. The hack improves on every aspect of the original as well as providing players with an all new experience by implementing Zero as a fully playable character from start to finish. If you ever felt that X3 was missing something in comparison to other Mega Man games, Mega Man X3 Zero Project this is the hack you should be seeking out.