Mario Rescues The Golden Mushroom is a heavily modified hack of the classic SNES game Super Mario World, it originally start out as a basic hack called Super Mario School World but has come a long way completely customizing all worlds complete with custom pallets, music, sprites, and more. If you want to see a video of Mario Rescues The Golden Mushroom in action, check out the video below. 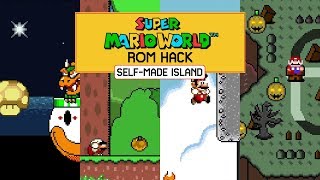 Started in the Fall of 2016, this hack has gone through a number of iterations before coming what it is present as today. In fact, the first version of the game, Super Mario School World, was originally created on a school computer however it was never released. Its first release was known as After three demo versions of hard work the hack was finally released on Quest on Mushroom Island but the name was changed to it’s current title due to similarity to another SMW hack. After three demo versions, the hack was finally released on SMW Central in 2018. Mario Rescues The Golden Mushroom takes you on an adventure out of the Mushroom Kingdom into a foreign land where Mario sets out to challenge and defeat Bowser, but this time the only one in danger is himself. Only the power of the Golden Mushroom can return Mario from whence he came. With much of the same functionality and not too many new concepts to adapt to, this hack is something like SMW but with a new coat of paint applied. Levels appear fair (with a few hiccups here and there, but developer updates have been active about responding to the community) and it retains much of the same pacing and overall enjoyment of the original game. The hack incorporates new tilesets and new sprites for a unique experience all its own and there are a number of enemies that are not present in the original SMW game.

Mario Rescues The Golden Mushroom provides players with a unique challenge and experience while not stepping too far away from how the original game plays. The obstacles that players face are familiar and even the new enemies are more aesthetically different rather than presenting a new function to adapt to. That said, this hack maintains much of the same spirit of its parent while offering a change of pace for veteran SMW players without ramping the difficulty up to rage-quit levels.

Much of the sounds, mostly the music, has been altered in this hack going so far as to heavily edit tracks from other titles (such as Sonic The Hedgehog 2) and insert them into the game. While this can be somewhat thematically jarring, it is fairly amusing. If you wish to play this game you can download the Mario Rescues The Golden Mushroom Rom by clicking here.

So is this game worth a try? Mario Rescues The Golden Mushroom adds a number of thematic changes to SWM in terms of visuals, sound, and music, presenting itself as a story or Mario adventuring in a place far far away from the Mushroom Kingdom. While it does not do much in presenting new gameplay concepts, it holds up to many of the same standards of the original game and retains its overall playability and fun. I would recommend this to any fan looking for a change of pace when it comes to replaying SWM.