Just as the name states, this hack turns Addams Family Values into a gauntlet run where you will be challenged by greatly reduced health and relentless

Below is a Youtube video of Addams Family Values The Gauntlet 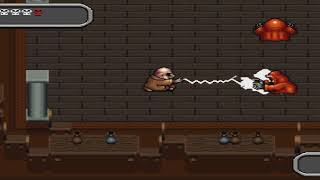 The aim of this fan game is to complete the amalgamated dungeon, the game uses rooms taken from dungeons.

Sadly there are no other members of the Addams family in this game which will help you. There are no bosses in this game and your inventory is limited.

Removing bosses from the game may seem like an easy way to remove some of the difficulty but The Gauntlet provides plenty of challenge with its traps and leagues of monstrosities alone.

Many aspects of the game play have been improved, some a boon and some a curse.

The goal of the game remains the same: rescue the Addams’ Family little ball of darkness, Pubert.

This hack does not make any changes to the original title screen of the game. This hack does not offer any changes to the core graphics of the game.

The first thing players will notice is Uncle Fester’s increased movement speed and significantly reduced health. While a lower amount of health increases the difficulty and tension of the game, the increased movement aid with maneuverability for avoiding enemies and projectiles with greater ease reducing some of the aggravation of the base game where Fester could often fall victim to being hit by an enemy approaching from his left side (due to his attack generating right of center of his sprite). Speaking of Fester’s attacks, the amount of damage Fester does is no longer decreased by taking damage and each attack that lands counts as a multiattack (hits twice) significantly increasing damage output. As this hack focuses mainly on providing a greater challenge for the game, it also limits the player’s inventory to four finite items for a playthrough.

The greatest change to the game comes at it’s alteration of the game’s levels, instead of progressing along the game’s original seven levels this hack takes the player into a dungeon of varied horrors using an assortment of tilesets from each level. Expect a slew of traps and monsters around every corner.

All of the sounds available with the original release of the game are present in this hack and remain unchanged.

If you wish to play this game you can download the Addams Family Values The Gauntlet Rom from here.

So is this game worth a try? There are not to many fan games of Addams Family Values on the Super Nintendo but this game is one of the better ones. For veterans of this title, this hack offers a fresh experience and increased difficulty while maintaining balance. Definitely something to take a look at if you enjoy facing the hazard of the game but are not so interested in the minor puzzle/adventure aspects the original game offered.

Addams Family Values The Gauntlet should take about an hour or two to complete.