Kaizo Mario World is a extreme difficulty ROM hack by T. Takemoto for the beloved Super Mario World game which strives on presenting the player with cruel opposition. If you want to see a video of Kaizo Mario World in action, check out the video below. 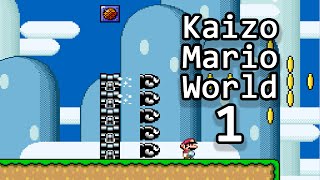 Kaizo Mario World, colloquially known as Asshole Mario, pulls the rug out from under the feet of anyone who may have considered themselves impressive SMW players. Accepted for taking the formula of “fair” levels in SMW and completely obliterating the very concept, this hack aims for the eyes without remorse. A particular phrase applies quite well when approaching this hack, and the hacks that followed this devious work: “Abandon all hope, ye who enter.” Few other games in existence will test not only a player’s skill but also their patience and sanity. Kaizo Mario World offers an avalanche of alterations to each of the levels of the game, completely rearranging them into what stands as the quintessential example of controlled chaos.

No changes to the title screen of the game are presented in this hack. Minor graphical issues present themselves from time to time due to the nature of certain effects being crammed together on the scene where the original game had not intended, but it is nothing game breaking.

Kaizo Mario World presents all the same mechanics of SMW that players will be familiar with and does not make any alterations to the functionality of the game. While remaining true to the abilities and limitations, the game pushes the boundaries of every possible maneuver and trick in the player’s arsenal. A near-picture perfect grasp of the frames of Mario’s move set as well as hitboxes and what can and cannot kill you at certain points is required. This hack tests everything and mercilessly dishes out challenge after challenge until the very moment that you put it down. Notably, most things that are considered to be “unfair” are ruthlessly built into the game along with invisible blocks (leading to death), blind jump (leading to death), near-impossible precision jumps and chain jumping enemies (often leading to death). Slap on devilishly placed enemies, levels with almost no safe walkable surface, and goalposts that will kill you, and you’ve got the perfect concoction for madness.

This hack does not make any changes to the original music of the game.

If you wish to play this game you can download the Kaizo Mario World Rom by clicking here.

So is this game worth a try? All salt aside, Kaizo Mario World, is a uniquely entertaining hack that took a simple concept and pushed it as far as it could go. It’s brutally challenging and for that reason extremely engaging. There’s a reason it is so popular (infamous, even) and why it stands out as one of the most iconic SMW hacks out there.