Created by the modder and Youtuber, russmarrs2, Legend of Zelda Waluigi of Time is an amusing ROM hack which completely replaces the model of Link with the true hero of time, Waluigi. If you want to see a video of Legend of Zelda Waluigi of Time in action, check out the video below. 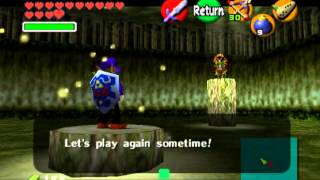 Legend of Zelda Waluigi of Time is a very simple ROM hack that rides on the ever persistent meme that Waluigi has become. Enjoy all the excitement, adventure, and wonder of the original OoT game but experience it in the shoes of the rightful and undeniable Hero of Time, Waluigi. The hack creator has gone so far as to add new voice clips to the game replacing Link’s regular noises with Waluigi’s iconic “waah”s and other strange noises that come out of him. For those wondering, this hack also works with Master Quest so you can enjoy having the true Hero of Time himself in your extended playthrough to OoT.

While the original title graphic remains the same for this hack, true to the model swap, you can see Waluigi riding on the horse in Link’s stead. The major change that you will find in this hack is the change of Link’s sprite in both his kid and adult forms which have been changed to Waluigi in both aspects.

Legend of Zelda Waluigi of Time does not offer any gameplay changes from the base game.

Few sounds have been altered in this hack of the game; namely, Waluigi’s iconic noises have been added to replace Link’s normal sounds. If you wish to play this game you can download the Legend of Zelda Waluigi of Time Rom by clicking here.

So is this game worth a try? Legend of Zelda Waluigi of Time is a humorous hack for those looking to enjoy OoT with a minor twist thrown in. The game remains unchanged, save for Waluigi’s mysterious appearance in the Zelda world, and a few changes to sound bites replacing Link’s regular noises. Mostly just a meme hack for cheap laughs but nonetheless implemented well.