Majoras Mask Redux is an improvement hack by Maroc which aims to add a number of quality of life (QoL) features to the timeless classic The Legend of Zelda: Majora’s Mask. The sequel to the critically acclaimed The Legend of Zelda: Ocarina of Time, the notably more grim and dark Majora’s Mask was released on the Nintendo 64 in the mid-to-late 2000s and took the industry by storm introducing an inventive and intriguing three-day cycle along side player transformations and time-travel via the newly iconic ocarina. Stepping up proudly to be bigger and better than any previous Zelda title, Majora’s Mask ran on a much improved engine from Ocarina of Time and required the N64s Expansion Pak making one on a short list of games with this prerequisite.

If you want to see a video of Majoras Mask Redux in action, check out the video below. 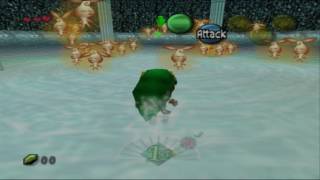 Majoras Mask Redux seems like it is as close as we’re going to get to what fans were hoping for when Majora’s Mask 3D released for the Nintendo 3DS in 2015. While the 3DS rerelease of Majora’s Mask did alleviate a number of “issues” that arise when looking back at old games after being spoiled by modern time, it also threw a number of new quirks that the original game never suffered from, things such as greatly crippled Zora swimming mechanics or completely altering boss fights from how they existed in the original release. As a base, the hack creator has taken the QoL improvements from Majora’s Mask Randomizer and then set out to tweak and improve the entire game experience to create something that can easily be regarded as the ideal way to experience Majora’s Mask while retaining it’s original charm, aesthetic, and challenge, only removing tedium and some unnecessary nuances introduced along with the North American release of the game. Possibly the most impressive feature of Majoras Mask Redux is it’s recent ability to be customized to a player’s preference. Due to some sharp work by Admentus, a little tool called Patcher64+ Tool allows players to pick and choose amongst a list of features in order to perfect their preferred experience right down to the choice between what version of Skull Kid’s face you would like to see.

The title screen colors have been restored to how they appeared in the Japanese release of the game. There are no major graphical changes in Majoras Mask Redux outside of a few changes to colors or textures either to remain in keeping with lore or to improve slightly.

Majoras Mask Redux presents an absolute avalanche of QoL changes that will make you wonder how you ever managed without them. At the top of the list, and easily the most important, is the feature of remapping the three masks and the ocarina to the D-pad; this makes it so that the player now has the ability to slot three items of their choice rather than before, essentially, forced to keep those slots occupied by masks and/or the ocarina. Another major change, and one that seemed like such a no brainer, is the ability to use the ocarina underwater.

Ultimately, Majoras Mask Redux plays just as Majora’s Mask was released and intended but has been dusted off and shined so that some of the more trivial and tedious elements of the game have been either completely removed, significantly altered, or tweaked to make them that much more pleasant for the modern gamer.

All sounds and music in the game are as they were in the original release with a handful of restorations here and there where the North American release may have been missing a sound or two. If you wish to play this game you can download the Majoras Mask Redux Rom by clicking here.

Patcher64+ Tool for patching your ROM for a custom experience.

So is this game worth a try? Majora’s Mask Redux focuses on remaining faithful to the Japanese release of the game while brining forth a slew of QoL improvements to create the optimal playing experience. Players will enjoy the classic Majora’s Mask experience with a handful of tools to make the experience much more streamlined. Overall, the ideal way to play the game in the new age.