Super Mario 64 The Green Stars is a ROM hack created by Kampel125 and is intended to be a sequel to Super Mario 64 with new levels and an increased number of starts to collect. If you want to see a video of Super Mario 64 The Green Stars in action, check out the video below. 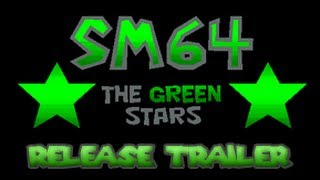 Released in 2013, The Green Stars has often been compared to another hack, Super Mario Star Road, for it’s efforts toward imitating the design and aesthetic of the original Super Mario 64. For veteran SM64 players, this hack will add variety without significantly altering the overall challenge of the game. The story is slightly altered from the original game though it still follows the classic Mario plot line. This time Mario has to save Princess Peach and reclaim the power stars; only this time Bowser can only be reached via a rocket ship that the Toads have designed and Bowser has locked it away before Mario can use it. It’s a simple and silly premise that’s set in place to link the story to the ideas of SMGalaxy. This hack presents a splash screen in place of the original game’s title screen. The hack presents all new levels but otherwise uses the same tilesets, enemies, and textures from the original game.

Super Mario 64 The Green Stars offers a heavily altered Mario 64 experience via new maps and a variety of challenges both familiar and new with an average difficulty that should be approachable to even new players. The hack has a tendency to feel a tad imbalanced due to some levels containing zero effort stars along side stars that require advanced timing and tactics to acquire.

The Lakitu camera has been completely removed from the game instead opting for a more streamlined combination between the Mario and Lakitu camera. Also, the creator has implemented a feature that zooms out and increases your field of view by holding down the Left Trigger, which can be particularly useful when scoping out jumps slight outside your typical sight range.

The music for each of the levels, and even music for items such as the Metal Cap, have been changed to various songs from other titles. The creator of this hack has chosen some great tracks for this hack including tracks such as Pokémon Gold/Silver/Crystal‘s Dark Cave and Sonic 3D Blast‘s The Final Fight. If you wish to play this game you can download the Super Mario 64 The Green Stars Rom by clicking here.

So is this game worth a try? Super Mario 64 The Green Stars is set as a sequel to SM64 and as such focuses on maintaining much of the original game’s general design and aesthetic presenting players with many familiar challenges with even more new ones mixed in. Ultimately, the game is no incredibly challenging, only slightly more so than it’s parent game, and will feel familiar to veterans while being approachable for new players. The sheer number of stars presents hours of gameplay and the moderate difficulty can keep one playing for hours without the inevitable rage quit of some other hacks.