Zelda 64 Dawn And Dusk is a ROM hack of the N64 classic The Legend of Zelda: Ocarina of Time created by Captain Seedy-Eye and aimed at providing a much sought after expansion to the original storyline and gameplay of the base game. If you want to see a video of Zelda 64 Dawn And Dusk in action, check out the video below. 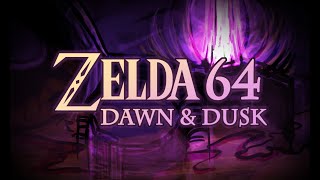 Zelda 64 Dawn And Dusk reuses the assets from the base game but presents itself in a completely new light with an entirely new world and story to immerse yourselves in. Players will adventure through two opposing locales, Dawnside and Duskside, in an all new experience to bring peace to the world. This time around you play as a descendent of a priestess who used her immense power to confront and lock away a legendary beast who was being used in the struggles between a war torn kingdom. The priestess’ actions quelled the ongoing battles but not before the beast’s rampage pushed both side into ruin. It falls on you to set out and protect the world from the beast’s imminent return. Averaging around two to three hours of content for the typical player, Dawn And Dusk is a short but sweet expansion of the concept and ambience of OoT and the spiritual manifestation of what could have been had the Nintendo 64 Disk Drive not released as a commercial failure in 1992.

The title screen of this hack is presented the same as the base game, however, the hack offers a unique opening once you create a new file. Utilizing the same assets and enemies from the base game, Dawn And Dusk is bound to remind players of OoT whiles standing out as it’s own title as the player is lead to explore freshly designed levels with two distinctive themes.

The overall gameplay of Dawn And Dusk is identical to OoT. The game utilizes the same control scheme and Link’s abilities and skills remain unchanged along with the items that he acquires along the way, the game is going to feel nostalgic to fans.

Instead of different dungeons and levels to delve in, the game is presented as a single world sprinkled with puzzles and platforming hazards iconic to the OoT style. Veteran players will be presented a worthy challenge for their experience level while less experience players may find themselves faced with their greatest challenge yet again and again.

Zelda 64 Dawn And Dusk presents an all new soundtrack that breathes as much life into its new world as the OST for OoT did for its world. Composed by ROMhacker Captain Seedy-Eye, the soundtrack does a wonderful job of giving both the Dawnside and Duskside distinctive tones to set them apart. If you wish to play this game you can download the Zelda 64 Dawn And Dusk Rom by clicking here.

So is this game worth a try? Zelda 64 Dawn And Dusk is the game fans have long awaited since the failure of the 64DD. Ocarina of Time was originally states to get an expansion but the project was scrapped following the fall of Nintedo‘s project. This ROMhack offers everything long time fans could have hoped for with an all new world and story to follow along with brand new music and a reasonable increase in difficulty that offers a challenge to veteran players. This hack is heavily recommended, and while a bit short in length, is a worth while investment.