Banjo Dreamie is an ambitious romhack initially started by Loggo in 2013 and designed to be the sequel to the Nintendo 64 classic Banjo-Kazooie. Banjo-Kazooie was released for the N64 in 1998 by Rare and is the first game in its franchise. The game widely features nonlinear gameplay where players will be challenged by puzzles, platforming, and various enemies prompting them to utilize Banjo’s range of abilities and gathered items. It was critically acclaimed for its dynamic soundtrack, level design, and graphics.

If you want to see a video of Banjo Dreamie in action, check out the video below. 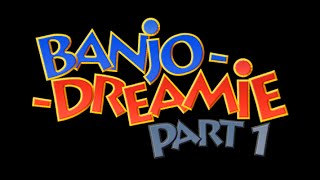 The developer, Loggo, has self-inserted themself into this hack and as the story goes they have taken the power of the witch Gruntilda and used that power to create the Dreamy Depths. Trapped in this new and dangerous fantasy, Banjo and Kazooie must set out to set things right. Banjo and Kazooie venture through eight unique worlds to collect a total of 200 musical notes on their way to defeat Loggo. Each world offers new challenge to the player with some containing challenges that cannot be surmounted the first time through. This hack utilizes a fair degree of backtracking, warning the player that not each world will be able to be completed without first obtaining skills in worlds further on.

This hack presents a slightly altered title screen from the one in the original game, as presented below. This hack makes use of custom tilesets to fit its theme. Players will also find unique enemies. Otherwise, this game reuses some of the base games tilesets along with its own unique ones to create a world befitting the BK franchise.

Banjo Dreamie is a bit slow to start as even the most basic of abilities have to be acquired by traversing across the beginning maps while avoiding the dangers of enemies that you cannot yet attack. Limited jumping capabilities in the face of a series of tight jumps certainly makes for a frustrating start but things begin to pick up once you have managed to acquire some handy abilities.

The developer, Loggo, did not include Jiggies in the game whatsoever, stating that he could not figure out a functionality for them so decided to omit them entirely. As such, progression relies on collecting notes to unlock door similar to SM64’s Star Doors.

Once you get past the initial slow start, the game begins to open up and feel much more like the Banjo-Kazooie fans are more accustom to.

Holding true to the wonderful and lively music that is present in the original BK game, Banjo Dreamie presents a near equally enjoyable soundtrack utilizing similar composition and transitions before various levels and locales. If you wish to play this game you can download the Banjo Dreamie Rom by clicking here.

So is this game worth a try? Banjo Dreamie was a long time coming and when it finally released many fans of the original game had a lot to say about it. This hack presents a difficulty unlike the original BK game in that it severely limits the player at the beginning and forces them to master basic skills while testing their patience. It is very likely that some will put this down out of frustration, but I would implore any BK fan to tough it out and push through past the somber beginnings of this hack.