If you want to see a video of Ocarina of Time Randomizer in action, check out the video below. 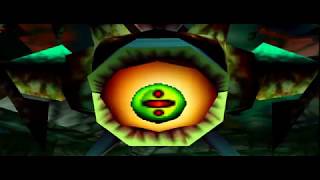 Ocarina of Time Randomizer offers a slew of customization from altering the players starting inventory to changing the game’s logic so that one never knows what room they will appear in when they pass through a door. This mod offers both stable and unstable builds as well as logic that will build the game in such a way that prohibits it from being unbeatable. In this mod, it is possible to happen upon any item at any given time whether it be from a random chest or from a shop’s inventory. A player could luck out and find the perfect item for much less than it is worth in the base game or be completely shafted when a certain item doesn’t drop for them. Ocarina of Time Randomizer can be a delight or a complete nightmare, depending on the settings one choses. It forces players to tackle the challenges of the game in a completely new way and encourages the player to remain adaptable and resourceful as there will be a number of times when the usual tactic simply is not available to them.

This project sports a slightly altered version of the original game’s title screen. Like the majority of the project, there are no new visuals be had but rather the project presents options for cosmetic randomization such as altering the color for Tunics or changing the color of the user interface itself.

Ocarina of Time Randomizer plays exactly like OoT with the major difference coming in at how the game progresses. Since items are completely random, it is never guaranteed if the player will be able to find a key item that they will require to progress past a particular event or section of the game. This changes the typically linear style of the game to something bordering on nonsensical and adds a fair degree of challenge for all players. Keeping an open mind and remaining flexible is key to moving forward, however, in some instances the game may prove to be unbeatable.

Similar to the options for cosmetic changes, this project allows the player to choose whether sounds are also randomized which can potentially lead to some hilarious, and some very jarring, alterations to the typical noises players would hear while enjoying the game. If you wish to play this game you can download the Ocarina of Time Randomizer Rom by clicking here. I found that it is more reliable to use the website randomizer, here, instead of downloading it to your system.

So is this game worth a try? Ocarina of Time Randomizer is a mod that adds near endless variety to the base experience of Ocarina of Time by altering the drops for just about every item in the game. This mod is used often in competitions to challenge veteran players to beat Ocarina of Time in spite of the fact that the natural progression of the game has been dismantled and entirely jumbled. It is a great way to add extra excitement (and often frustration) to any Ocarina of Time run if you find yourself replaying to for the nth time.