Luigi’s Mansion 64 is a ROM hack created by Mariocrash and Me-me, it uses heavily modified levels of Super Mario 64 and follows the adventures of Luigi as he sets out to defeat King Boo. If you want to see a video of Luigi’s Mansion 64 in action, check out the video below. 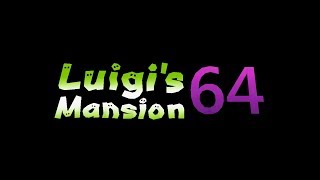 Luigi’s Mansion 64 improves upon the graphics of the original game and the creators have greatly redesigned each of the levels in the game to reflect the style and direction of Luigi’s Mansion on the Gamecube. Prepare to enter King Boo’s Mansion on an adventure to collect the Starlings and defeat the ghosts plaguing the mushroom kingdom. Per suggestion from the community after the hacks original release in 2015, this hack has come a long way from where it began; levels were once simply retextures of the original game’s levels, maintaining all the same enemies and objectives, but the creators have since gone on to create new levels and present players with new challenges. Unfortunately, Luigi’s Mansion 64 makes a number of references to The Poltergust but the faithful item is not actually included in the game. As the game would have had to be completely redesigned to include, and effectively make use of, the item, it is understandable that the creators did not go so far as to build it into the hack.

Luigi’s Mansion 64 presents a slightly altered title screen from the base game, as seen below. This hack incorporates a number of modifications including altering the model of Mario to represent Luigi instead and changes to the HUD in conjunction with the thematic changes applied to the game. This game makes use of custom tilesets and enemies to drive home the aesthetic of Luigi’s Mansion.

Luigi’s Mansion 64 offers a similar gameplay experience to its parent game while most of the hack is centered around the thematic changes made to SM64. New challenges include a variety of puzzles and maze like mechanics as well as hidden walls and more.

As well as a few new sound for enemies, the creators almost completely altered the music of the base game and replaced the tracks with tracks from other titles all in light of shifting the thematic aesthetic of the game. If you wish to play this game you can download the Luigi’s Mansion 64 Rom by clicking here.

So is this game worth a try? Luigi’s Mansion 64 is a very old hack started in 2008 that took some years to fully release after the original developer ceased work on the project. It was picked up and completed as something of a “labor of love” project. This hack offers a total graphic update and redesign of the original SM64 and aims to give the game a look and feel similar to Luigi’s Mansion. Well crafted and well designed, this hack is a strong alternative for veteran players of SM64.