Super Mario 64 Chaos Edition is, as the name implies, a completely chaotic romhack of Super Mario 64 created by Kaze Emanuar in 2014 with the goal of challenging players to beat the game while enduring random code implementation.

Super Mario 64 was a major player in the anticipation, and later on the popularity, of the Nintendo 64 system and the game has ranked amongst the greatest games of all time since its release in 1996. It revolutionized the 3-D platforming experience and has gone on to influence countless other titles and to this day it is still referenced as a timeless classic that developers study in hopes of producing another game as influential and experience defining as Super Mario 64.

If you want to see a video of Super Mario 64 Chaos Edition in action, check out the video below. 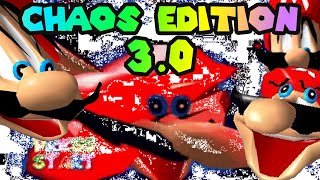 Super Mario 64 Chaos Edition offers a unique experience unlike any other SM64 romhack out there by applying a number of random effects to the game at completely random intervals such as low gravity, certain buttons being deactivated, control scheme changes, corrupted textures, taking away lives (possibly into the negatives) and much, much more.

The sheer number of random effects that can occur during gameplay ensures that the player will be exposed to bouts of laughter and frustration as at times the hack feels like it is plotting against you. My first launch of this hellish incarnation not only made Mario entirely invisible but made it so that he could not open doors coupled with continuous health lose. One life down the drain less than a minute into the game.

Super Mario 64 Chaos Edition is pure enjoyment if you are just looking to kill some time and goof around. The creator of this hack never intended it to be played to completion, as the hack actively fights against your almost the entire way, but even so a number of absolute mad lads have managed to do so anyway.

No alterations to the original title screen of the game was made in this hack, a deliberate choice by the creator in order to present the game as a legit version of SM64. Truly fiendish. Nothing specifically has been changed to the games graphics in this hack but it is possible for a number of the textures in the game to randomly be altered via the hack’s randomizing effects.

When approaching Super Mario 64 Chaos Edition it is best to simply throw out any sense of sanity before one starts playing. While several updates have been implemented to present the game as stable as possible and to avoid game breaking glitches, it is likely that the game will often present the player with insurmountable odds or cause them to “glitch” into areas they should not be able to go.

Like the graphics, no sounds were added or altered to the game however sound can be randomized across any part of the game such as Mario’s voice lines being replaced with enemy noises or other character’s voice lines such as Princess Peach’s soundbite at the end of the game.

If you wish to play this game you can download the Super Mario 64 Chaos Edition Rom by clicking here.

So is this game worth a try? Super Mario 64 Chaos Edition is a a chaotic masterpiece that will have any player fighting to maintain some semblance of sanity while they enjoy a timeless classic in a completely new light. Players will be fighting against the game itself as it pulls random code out of a hat of tricks and throws them spontaneously into the fold for some truly outrageous and potentially frustrating moments. I would recommend this to anyone and even suggest it to groups for some good old insanity laden fun.