Goldeneye X is a romhack of Rare‘s Perfect Dark which effectively recreates the 1997 GoldenEye 007 using the updated engine, it was created by a large team of talented individuals that went by Shaken Games. Released in 2000, Perfect Dark was the spiritual successor to Rare‘s GoldenEye 007 and as such both games share many of the same features. Both titles were first-person shooters with heavy emphasis on co-op and multiplayer aspects and both were critically acclaimed for their depth and replay value.

If you want to see a video of Goldeneye X in action, check out the video below. 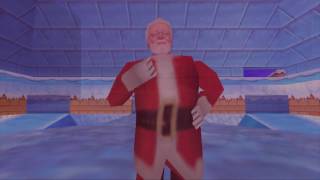 Goldeneye X set out to bring the Goldeneye experience to a better engine with the advantages of better AI, weather effects, bots for multiplayer, much larger multiplayer maps, and so much more. Last updated in 2016, it seems as though this project has been left incomplete but the work that the developers managed to do up until that point is still worth checking out for long time Goldeneye fans. As it stands, this is a multiplayer hack as the developers never officially completed work on the campaign portion.

Presented as a Goldeneye 2.0, X offers all the nostalgia of the classic game including its levels and weapons all improved by Perfect Dark‘s superior engine. Experience GoldenEye like the good old days complete with all the brilliance, frustration, and laughs that come along with it. A moderately improved AI will see you challenged and on your toes even if you cannot get a few friends to tag along.

The hack offers levels and special objectives and limitations as Assignments for players to take on. Set up as many bots as you like and pick your favorite Assignment out of 30 such as a pistol only King of The Hill variant or start off with the basics if you are feeling a bit rusty.

GoldenEye X offers a stylized title screen as seen below. Practically identical to the original game, the devs have created a near perfect replication of GoldenEye within the more advanced system as well as adding extra effects such as improved lighting and weather for many of the levels.

Goldeneye X plays exactly as its parent game and the developers have worked hard implementing all the same weapons and levels into the Perfect Dark engine. Not stopping there, the developers of this hack have improved upon a number of qualities of the weapons to ensure balance while remaining true the the heart and soul of the original GoldenEye.

This hack offers all the same music from the original GoldenEye game.

If you wish to play this game you can download the Goldeneye X Rom by clicking here.

Not sure what I was doing wrong on this end, but I could not get the game to properly run using Project64 and instead loaded up BizHawk which handled the same patched ROM perfectly.

So is this game worth a try? Goldeneye X is a faithful recreation of the original GoldenEye and is sure to be a trip down nostalgia lane for any veteran of the original game. Suit up and lock in for a blast from the past in the fast paced reincarnation. One can only hope that the developers continue to work on this project but even so it stands as a glowing representation of what a community can put together given some time and love.