This hack serves mainly as a sprite change to the original game with minor changes to other background elements and a handful of bug fixes. 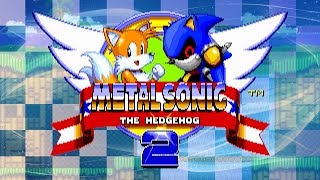 This fan-made “hack” for Sonic the Hedgehog 2 plays exactly as the original game released by Sega in 1992. Turn against your creator, Dr. Eggman, and collect the Chaos Emeralds for your own purposes. The developers have included a number of bug fixes that came to the title over time. Many of these fixes remove game-breaking glitches and provide a flawless gameplay experience so players can enjoy at ease.

Enjoy the full Sonic the Hedgehog 2 experience in style that never misses a beat as each and every altered element in this game matches seamlessly with the original content from text to color pallet.

Take fan-fiction into your own hands and transform into Super Metal Sonic with the power of the Chaos Emeralds!

The title screen of the game has also had the art of Sonic swapped with Metal Sonic as well as a change to the title font to represent the new main character’s name.

Not quite an overhaul or a graphic update, this hack swaps the character sprite of Sonic with the antagonist Metal Sonic. The developers of this “hack” went the extra mile not only replacing the character model but also replacing all elements within the game that feature Sonic, such as: UI elements, special stage models, and features in the background, etc. To further push the immersion of the sprite swap, the developers have also included a handful of custom animations for Metal Sonic such as replacing Sonic’s iconic super-speed blurred feet with a jet-engine boost animation.

The only noticeable change from the original games sound is a sound effect added to the release of the Spin Dash or Super Peel-Out which creates a small propulsion noise for added detail. So is this game worth a try? If you are a fan of the original Sonic games, and a fan of Metal Sonic in general, this is a nice little hack to bring a little extra fun to an already great title. Since it does not directly effect any of the gameplay, players are safe to enjoy the game without running into any issues. As far as changes to game graphics go, this hack remains true to overall feel of the original game making it seem as though the game was intended to be created and released this way; it is of professional quality and feels like refurbishing a beloved toy.