Battletoads And Double Dragon: The Ultimate Team is a crossover beat ’em up game released in 1993 and praised for its combat patterns and animations. It took two beat ’em up franchises, the British company Rare‘s Battletoads and Japanese company Techno Japan‘s Double Dragon, and mashed them together into one kick-butt title.

If you want to see a video of Battletoads And Double Dragon Enhanced Color in action, check out the video below. 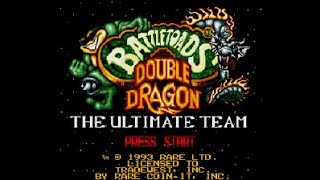 This adjustment to the original Battletoads And Double Dragon works to make the colors of the game stand out more and brings life to many of the flat colors that plagued some sprites and background elements of the original release. Many colors have been swapped out entirely giving the overall game a more concise color palette. The developers of this hack have gone through and updated almost every element of the game to ensure that everything stands out clearly against one another. The new color palette (on the right) is slightly more easy on the eyes and less striking. Instead of constantly pitting vibrant colors against one another, there is some wiggle room for more tonally neutral colors.

The title screen of Battletoads And Double Dragons has not been altered for this hack. The Enhanced Color hack adds color variety to a number of the enemies in the game which helps  to alleviate a degree of visual stagnation. That game achieves this while remaining true to the original art style and direction of the title.

Some elements of the game stand out more to the player enhancing the game play experience and removing moments when elements will blend together and become hard to tell the difference between.

Place side by side, it is easy to see the changes especially when taking a look at the sprites which look more defined, fixing how the color blur together, and stand out much more versus the background they are standing against. There were no gameplay changes made for this hack.

All sounds of the original release of this game remain intact and unchanged.

If you wish to play this game you can download the Battletoads And Double Dragon Enhanced Color Rom from here.

So is this game worth a try? The Battletoads And Double Dragon Enhanced Color hack is an extremely simple and harmless hack, definitely something to try out if you are a regular player of Battletoads And Double Dragon. While most would not have had many issues with the color palette of the game, this is certainly an improvement and worth downloading to see what you think. Overall, just a boost to the original experience and provides a fantastic improvement to the graphical fidelity of this classic title.